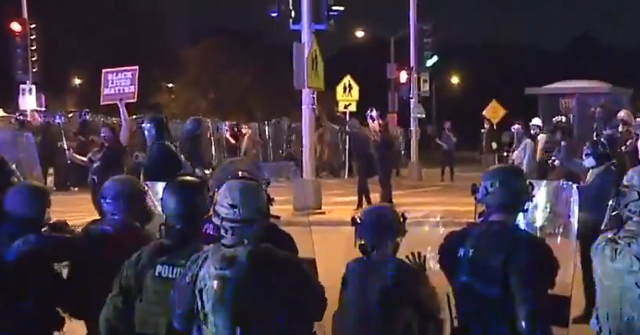 Protesters in Wauwatosa, Wisconsin, took to the streets again Friday night in defiance of a 7 p.m. curfew ordered by city officials. National Guard and local police prepared to enforce the order and declared the protest an “unlawful assembly.”

The Wauwatosa Police Department tweeted a declaration that the protesters gathered in the city following the 7 p.m. curfew constitute an “unlawful assembly.” The tweet states that protesters are being notified of the order.

Law enforcement has declared an unlawful assembly at Wauwatosa Av. and W. North Av. The emergency curfew went into effect at 7:00 PM. The group is being provided with announcements and orders to disperse immediately.

Police officials say the crowd refused to comply with the orders and officers are moving “compel dispersal.”

Law enforcement is now moving toward the crowd to compel dispersal. The crowd has had an hour to disperse voluntarily.

The protesters lined up near Wauwatosa’s City Hall. Video shows police launching tear gas in an effort to disperse the “unlawful assembly.”

Police officials tweeted the use of tear gas was in response to officers being struck by bottles thrown by protesters.

Law enforcement officers were struck with bottles, and deployed tear gas to stop the unlawful assembly.

Bob Price serves as associate editor and senior news contributor for the Breitbart Texas-Border team. He is an original member of the Breitbart Texas team. Price is a regular panelist on Fox 26 Houston’s What’s Your Point? Sunday-morning talk show. Follow him on Twitter @BobPriceBBTX and Facebook.