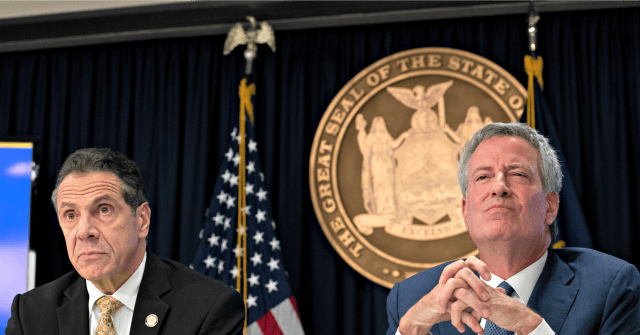 Several areas of the city have seen a spike in coronavirus cases, coinciding with the High Holiday season on the Jewish calendar. Traditionally, it is a time when observant Jews spend many days together in synagogues, praying, fasting, and celebrating.

On Monday, however, Cuomo threatened Jews: “I have to say to the Orthodox community tomorrow, ‘If you’re not willing to live with these rules, then I’m going to close the synagogues.” He later added that he would say the same to “black ministers.”

In response, the New York Post reported, some Orthodox Jews staged a protest at which they blocked intersections and set fire to a pile of coronavirus masks:

Hundreds of members of the Borough Park Orthodox community took to the streets Tuesday night, defying orders to disperse and lighting a fire in protest of new state-mandated restrictions imposed on area synagogues, schools and non-essential businesses over a COVID-19 surge.

One large crowd huddled closely together at the corner of 50th Street and 15th Avenue at about 9 p.m. as community activist Heshy Tischler ripped Gov. Andrew Cuomo and Mayor Bill de Blasio over the order that shuts down schools completely and limits houses of worship to 10 people in certain COVID-19 hot spots.

Things also turned unruly when the crowd lit a rubbish fire after midnight at the intersection of 46th Street and 13th Avenue and chased away two city sheriff’s deputies who responded.

The defiant crowd chanted “Jewish lives matter” as they held their ground.

Videos of the unrest circulated online:

Jewish men and boys in Brooklyn start a fire in the street to protest COVID-19 restrictions. pic.twitter.com/ez6N9RTEXC

De Blasio was also a target, following repeated episodes this summer in which he called out the Orthodox Jewish community for holding large gatherings — then attended large Black Lives Matter and transgender rights protests.