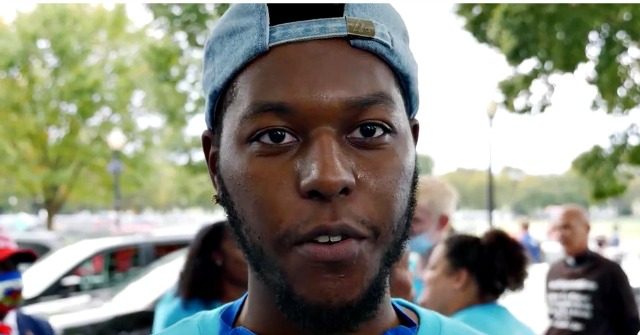 A man who attended the Blexit “Back the Blue” event in the nation’s capital on Saturday countered the narrative frequently touted by radical leftists, emphasizing that being American “isn’t a skin tone” but “knowing what your freedoms are and defending those freedoms.”

Hundreds gathered in the nation’s capital for Saturday’s Blexit’s “Back the Blue” event. One of the attendees pointed to the mix of people of all backgrounds and races, telling Breitbart News that it is emblematic of “what America is.”

“I mean if you look at this group of people that we have out here, we’ve got Asian people, Hispanic people, white people, black people, mixed people. We have mixed families. It’s everyone. because that’s what America is,” the attendee said, adding that law enforcement goes out and protects “everyone.”

“American isn’t a skin tone. It’s an ideology. It’s a mental state. It’s knowing what your freedoms are and defending those freedoms, not just for yourself but for everyone else,” he explained.

“And that’s why they want to strike so hard against it. Because if you can get people to believe otherwise, then America isn’t what it is. We see the beauty in it,” he added.

President Trump hosted an outdoor rally for supporters outside of the White House Saturday afternoon, addressing the crowd from a balcony.

“You understand that to protect the lives of Black Americans, and all Americans, we must support our police,” Trump told the crowd.

“Every day more Black and Latino Americans are leaving behind left-wing politicians and their failed ideology,” he added.