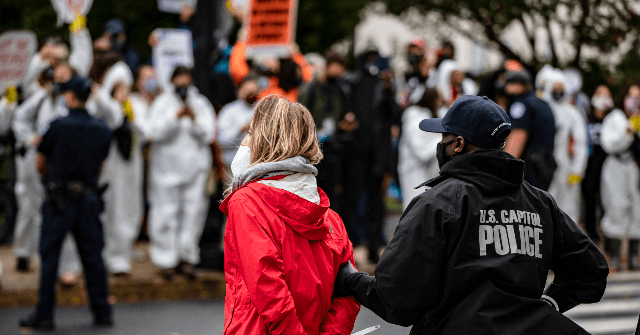 The U.S. Capitol Police on Thursday arrested 26 people protesting in the street against Judge Amy Coney Barrett’s nomination to the U.S. Supreme Court.

The 26 individuals were arrested for allegedly violating D.C. Code §22-1307, which prohibits “crowding, obstructing, or incommoding,” a misdemeanor punishable by imprisonment for up to 90 days.

One other person was arrested on a charge of resisting arrest, police said, a misdemeanor that carries a maximum penalty of six months’ imprisonment.

Senate Majority Leader Mitch McConnell (R-KY) said Thursday that he has secured enough votes to confirm Barrett to the highest court in the land.

“We have the votes,” McConnell told reporters in Kentucky after participating in early voting for the November 3rd election, Bloomberg News reported. The lawmaker also predicted that the Senate Judiciary Committee will approve Barrett’s nomination on October 22 and the full Senate would vote the next day.

“It’s clear to me from reading in the paper is that what’s going to happen is we’re going to be denied the ability to operate as normal… I know what awaits us,” Graham stated.

A slate of witnesses are scheduled to testify before a Senate panel Thursday on the fourth and final day of confirmation hearings for Barrett.

The UPI contributed to this report.