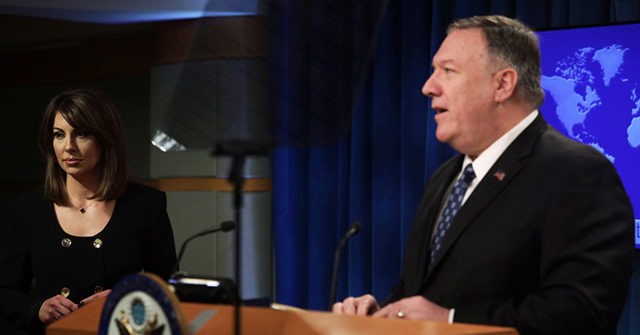 State Department spokeswoman Morgan Ortagus warned that the Chinese Communist Party (CCP) is “paying attention” to not only the happenings in Washington, DC, but local communities, she explained during a Tuesday appearance on Breitbart News Tonight.

Ortagus briefly detailed Secretary of State Mike Pompeo’s recent trip to Japan for the “crucial” Quad meeting between the U.S., Australia, Japan, and India — a group she said remains devoted to countering the CCP.

It is an alliance “we’re going to be reading about in the history books,” she said, detailing the reality of the CCP’s attempt to influence virtually every level of government in the United States.

Ortagus explained that the U.S. was not focused on China before President Trump took office, although she stressed that it was a criticism of members of both parties, many of whom thought China would “behave more responsibly” if the world brought them into more organizations. That, however, did not pan out.

“Focus on the relationships that matter,” she said of the Trump administration’s approach, citing the Quad and nations that are devoted to democracy, freedom, and “want to counter the Chinese Communist Party.”

“Nothing’s more crucial from a foreign policy perspective I think than what we’re doing there,” she said, explaining the magnitude of China’s threat at not just the national level, but across smaller communities in the United States.

Ortagus mentioned a speech Pompeo delivered to the National Governors Association in which he warned the leaders about the threats that the CCP posed to their states.

“The secretary was able to get a document declassified that he spoke to the governors about, where he essentially said, ‘Listen, the Chinese Communist Party is watching you,’” she said.

Ortagus said that the CCP is constantly examining officials to see determine if they are a friend, foe, or someone who is more “amenable.”

“We’ve also been calling out things and designating some of these, for example, the Confucius centers. We’ve been designating them as foreign missions, which means they’re part of the Chinese Communist Party,” she said, detailing the prevalence of Confucius centers on university campuses across America. They are billed as a “cultural bridge” between the U.S. and China, but “pretty dangerous pro-communist propaganda” comes out of those centers, Ortagus added.

“We have subsequently also had many legislators around the country, but one in particular who told a story in Wisconsin about how the Chinese Communist Party lobbied him as a California legislator, state legislator, trying to get pro-China bills and proclamations passed at the state legislature,” she continued.

More broadly, the State Department spokeswoman also talked about the historic strides the administrator has taken in the Middle East.

“We saw the foreign minister of Bahrain and UAE with the Prime Minister of Israel and the president recognizing, of course, Israel’s right to exist, Israel as a nation. That’s something that hasn’t happened in 26 years,” she said.

“There hasn’t been a peace agreement between in 26 years between an Arab state and Israeli state and now in the span of 29 days, we had two,” she continued, noting that they are making progress because the administration takes a “very very different approach to foreign policy.”

The Trump administration, Ortagus said, focuses on rewarding allies — not enemies, citing the Obama administration’s decision to give billions in sanction relief to Iran, the “world’s largest state sponsor of terrorism,” which continually threatens peace and stability.

“We have emboldened Israel,” she continued, also discussing the historic Afghan peace negotiations.

“Ronald Reagan had it right. You really do get peace through strength,” she said, adding that it is important to remember the progress the State Department has made as the election nears.

“We’re still focused on executing the vision for a strong foreign policy,” Ortagus added, which is “very different” from the last administration.