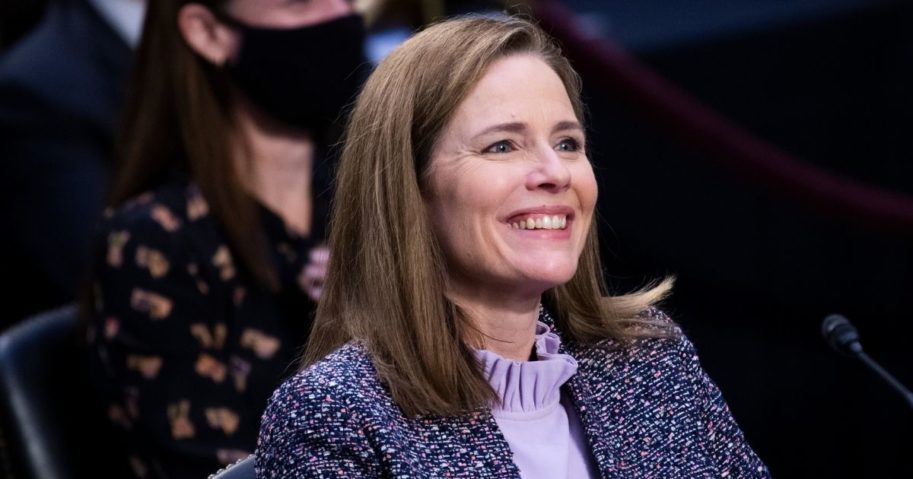 The Hill reported Barrett’s nomination will receive a vote on Oct. 22 at 1 p.m. EST, which will move it out of committee and prepare it for a floor vote at a later date.

Sens. Dick Durbin of Illinois and Richard Blumenthal of Connecticut were the only Democratic panel members present when GOP Sen. Lindsey Graham of South Carolina called to schedule the vote.

Both Democrats objected to moving her confirmation to the next step in an attempt to delay the process.

They were rebuffed by Graham.

Other Democratic senators exited the committee as Graham, the Senate Judiciary Committee Chairman, moved the process closer to the goal line.

NBC News reported Senate Majority Leader Mitch McConnell expects to begin floor consideration on confirming Barrett the day after the vote to move the judge out of committee.

Barrett could receive a final confirmation vote on the Senate floor the following week.

That would place Barrett on the court before Election Day on Nov. 3.

Do you think Judge Amy Coney Barrett will have enough GOP support to be confirmed before election day?

Thursday wrapped up four days of hearings, wherein Democrats challenged Barrett on a number of issues, but the proceedings were much tamer than in 2018 when Democrats turned the confirmation hearings of Justice Brett Kavanaugh into an all-out attack on his character.

Despite the relatively calm nature of the Barrett hearings this week, Democrats have made it clear they oppose both her nomination and her confirmation.

According to NBC News, the word “sham” was used by numerous Democrats when referring to Barrett’s hearings and likely confirmation following the proceedings on Thursday.

Among other complaints, the minority party in the Senate complained the process to replace Ginsburg was “rushed.”

RELATED: Amy Coney Barrett Tells Dem Senator: ‘I Hope You Aren’t Suggesting That I Don’t Have My Own Mind’

Blumenthal said on Thursday, “The consequence of this rushed process is that we’ve given inadequate scrutiny to this nominee. I move to delay these proceedings so that we can do our job.”

Meanwhile, Sen. Dianne Feinstein of California complained, ”This is being done without any precedent in the time at least that I’ve been on this committee.”

Added Feinstein, “It’s being done I guess to show power and push someone through.”

Democrats are at a 53-47 disadvantage in the Senate.

That number includes independent Sen. Bernie Sanders of Vermont, who caucuses with the Democrats.

Barrett is expected to be confirmed, as even if there are up to three unexpected GOP defections, Vice President Mike Pence could break a 50/50 tie by casting the deciding vote.

The country will know more about an exact date of a vote for Barrett’s confirmation once McConnell becomes involved in floor considerations next week.

But it is becoming more apparent the country will now have a Supreme Court which is at full capacity by Nov. 3, and that court would be solidified with a strong conservative 5-4 majority.

While Barrett’s confirmation would technically give the court’s conservative wing a 6-3 majority, Chief Justice John Roberts has drawn the ire of conservatives in recent years for his propensity toward siding with the court’s liberals in cases involving issues such as abortion and the Affordable Care Act.

The vice president referred to Roberts, who was nominated by former President George W. Bush, as “a disappointment to conservatives.”