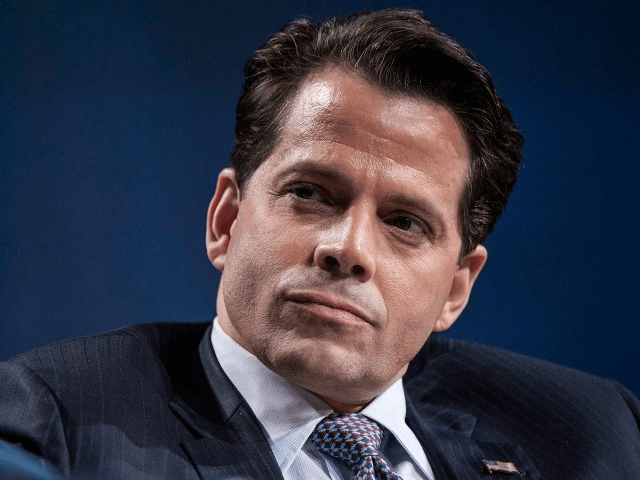 In the clip from the Fox Business interview, Trump said, “Look, I stood next to Joe, and I looked at Joe. Joe’s not lasting two months as president.”

He continued, “This monster that was on stage with Mike Pence, who destroyed her last night, by the way. Everything she said is a lie. They want to have thousands of people that are murderers rapists just pour into our country.”

Anchor Erin Burnett asked, “Is this behavior and these statements any different than what you’ve seen in the past?”

Scaramucci said, “Well, you don’t need to be a doctor, though, right?. If you and I are watching a football game and somebody’s leg is in the opposite direction than it should, we both know the leg is broken. You don’t have to be an orthopedic for that. So he’s obviously unwell. So the question is who’s telling him, who’s intervening, and the answer is no one. So, I mean, maybe his next job is going to be, you know, playing the king, George III in Hamilton, you know, coming out with a robe on singing. I don’t know what they’re going to do with the guy at this point.”

He continued, “Here are two things people should consider. That was a racist statement that Joe Biden is not going to last two months. I could hear the racist truck beeping as he was backing up over Joe Biden. That’s a tell to his base — that’s a tell to the Proud Boys and all the racists that he’s trying to gin up. And the second thing, and this is the thing I find so horrifying and disfiguring about him right now, is that he wants people to be hurt. He doesn’t have any caring or compassion about him, and he’s put these Secret Service people and staff members in harm’s way inside the White House. So how is he going to protect your family as an American citizen if he’s doing that to the families around him?”

He added, “So, to me, I find the behavior disgusting. I just don’t understand why a family member that loves him — or maybe they don’t love him. I don’t know what it is — why aren’t they intervening and sort of putting him in the penalty box?”

No Leftist Bias in Higher Ed? A Professor Disagrees

A closer look at a potential Biden administration

No Leftist Bias in Higher Ed? A Professor Disagrees

A closer look at a potential Biden administration