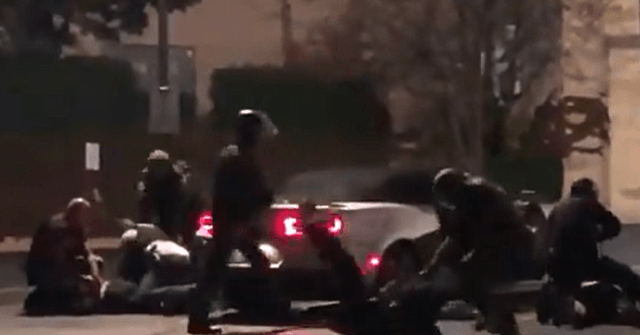 Four journalists covering the protests and riots in Wauwatosa, Wisconsin, Thursday night say that police violently detained and/or arrested them. The incident occurred in close proximity to the arrest and injury of Tracy Cole, the mother of the Wisconsin teen shot by police that led to protests, riots, and looting in the suburban-Milwaukee community.

“Tonight I was brutalized by police in Wisconsin,” independent video journalist Brendan Gutenschwager tweeted Friday. “This is me being dragged out of a vehicle and slammed to the pavement. Pleaded with officers that I am here as press, never even given a chance to cooperate before they escalated to this. I am in shock.”

What appears to be National Guard arresting protesters at 77th and Milwaukee. It’s a church parking lot. @WISN12News pic.twitter.com/0gcg70jTGQ

The contact with police came shortly after McGinniss shot video of police officers taking Mrs. Tracy Cole into custody. An officer directs McGinniss to leave. He responds, saying, “I have credentials right here.” McGinnis appeared to be standing on a public sidewalk about 50 feet away from the police engagement with Mrs. Cole. He also tells the officer he is with the Daily Caller.

Video of @ShelbyTalcott and my detainment.

As I was recording arrests, one officer told me to (quickly) clear the area.

Upon arriving to the car, I was forcibly detained (with press cred in hand) and as you can hear in the video, I tried my best to comply with police orders. pic.twitter.com/2I6GNH2CNX

McGinniss then starts walking away to leave the area and return to the vehicle where the other journalists were waiting. Now several hundred feet away and moving away from the scene, someone can be heard saying, “Don’t let me catch you.” McGinniss responds, “I’m out,” and begins running towards his awaiting ride.

At this point, the Reinwald video above begins and shows two of the journalists on the ground. It shows a third journalist, believed to be Gutenschwager, being physically pulled from the vehicle and thrown to the ground.

In a letter to America penned while in jail by Gutenschwager, according to his tweet, he says, “I was yanked out of the back seat of a vehicle, threatened with a TASER immediately, then tackled and dragged to the ground by multiple officers.” He stated he never offered any resistance and repeatedly identified himself as a journalist.

“I am out here doing my job,” he continued. “They did not care.”

He said he was then taken to a paddywagon and put in with a mix of protesters and other arrested members of the press.

Talcott later tweeted that she and McGinniss were eventually released without charges after another officer recognized them as media.

Gutenschwager and Nelson were taken to the jail and were eventually released.

Breitbart News reached out to Wauwatosa Police Department officials for a statement about the incident and what precipitated the police encounter.

Department spokesperson, Sgt. Abby L. Pavlik, responded, “We do not have the full details or reports from the arrests made last night. If any credentialed members of the press were arrested or cited on the night of October 8, 2020, they are advised to contact the Wauwatosa Police Department with verification of their media status.”

Breitbart responded with additional questions but an immediate reply was not available by press time.

Talcott ended her Twitter account of the night, writing, “Freedom of the press is important and allows reporters to be out past curfew, etc to report the news and get the truth out there. It is a dangerous thing if that right goes away.”

Bob Price serves as associate editor and senior news contributor for the Breitbart Texas-Border team. He is an original member of the Breitbart Texas team. Price is a regular panelist on Fox 26 Houston’s What’s Your Point? Sunday-morning talk show. Follow him on Twitter @BobPriceBBTX and Facebook.