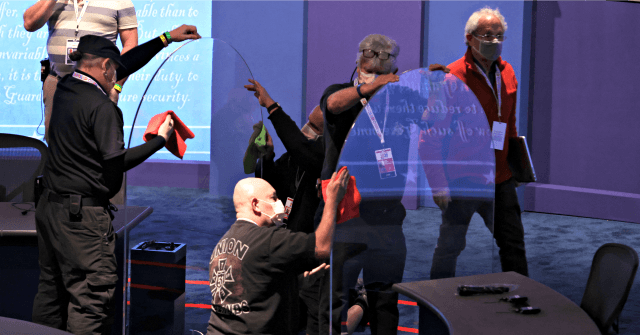 Jose-Luis Jimenez, a chemistry professor at the University of Colorado at Boulder, is none too impressed with the plexiglass dividers meant to combat the possible spread of Chinese coronavirus at Wednesday evening’s debate between Vice President Mike Pence and Democrat vice presidential candidate Sen. Kamala Harris (D-CA).

“Perhaps the ventilation rate is very high in that debate hall, and thus the risk to the debate participants is low. But they are sending the message to millions of people that talking indoors without a mask is safe, as long as enough distance is kept,” Jimenez told CNBC.

“Those barriers are a joke. It is just theater, to make it look like they are taking some precautions.”

If it were up to him, Jimenez would like to see the debate take place outdoors to signal to Americans that “every activity that can be moved outdoors, should be done outdoors, with enough distance.”

The debate is scheduled for 7:00 p.m. MDT at Kingsbury Hall at the University of Utah in Salt Lake City and will be broadcast live nationally.

Early Wednesday, the Commission on Presidential Debates was working to iron out details of safety measures. Trump announced he’d tested positive for the virus a little more than two days after he participated in a debate with Democratic presidential nominee Joe Biden.

The commission has said that Harris and Pence will be spaced 12 feet apart for their debate, instead of the 7 feet originally planned.

The UPI contributed to this report.