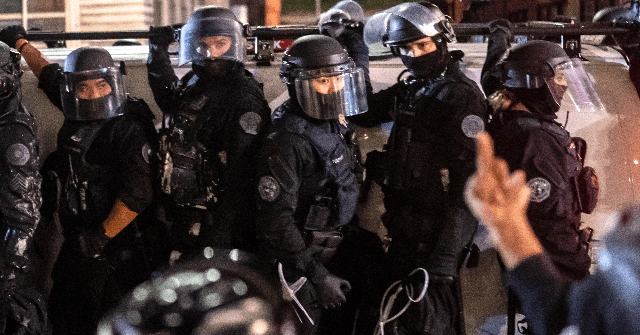 Police on Saturday night in Portland, Oregon, made a mass arrest of protesters, who they believed were planning a “direct action” event that threatened a policing center in the northern part of the city.

After one warning to stay off the streets Portland Police Rapid Response arrived and conducted mass arrests. PPB did not declare an unlawful assembly. #PortlandProtests #PDXProtests #BlackLivesMatter pic.twitter.com/CEtKXlrdZs

The police issued a press released about what took place on the 123rd day of almost nightly violence and destruction:

On Saturday, October 10, 2020 at about 9:30p.m., a gathering formed in Alberta Park, 1905 Northeast Killingsworth Street. The participants moved on sidewalks to North Precinct, 449 Northeast Emerson Street. When the group arrived, they were numbered at an estimated 75 people. Virtually all of them wore armor, helmets, masks, and/or carried shields and umbrellas.

North Precinct, an active community policing center operating 24 hours a day, 7 days a week, is a critical part of city infrastructure. It has been targeted numerous times over the past 130-plus nights by violent protests, including some that devolved into riots, arson fires, and violent attacks on officers. On numerous occasions, officers have attempted to deescalate by staying far back, and not intervening when streets were blocked by crowds. That strategy has not been successful in preventing violence from individuals in the crowd who are intent on forcing officers to respond.

The Portland Police Bureau (PPB) had information that the gathering was a planned “direct action” event. The crowd’s posture, including their armored attire, strongly suggested that this was planned to be another such event. PPB was also concerned about the safety of the protesters, who were clad in black and difficult to see, on a major thoroughfare that was open to vehicular traffic. Due to these concerns, and the fact there were resources in place to make arrests, action was taken earlier in this event than ones before.

Videos posted on social media show protesters who look as uniformed and weaponized as the police, making it difficult to distinguish people in the crowd.

Will masks become the 'new normal' even after the pandemic has...

Will masks become the 'new normal' even after the pandemic has...