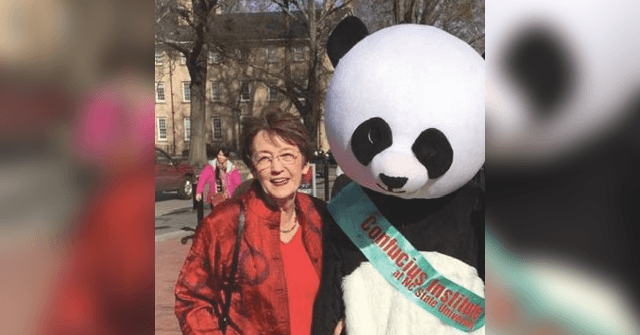 North Carolina Secretary of State Elaine Marshall in 2018 sought to demonstrate her support of the CCP-sponsored Confucius Institute in her state with a photo of her and the institute’s mascot, Baobao, despite increased federal scrutiny of the Chinese Communist Party’s influence in the United States.

The July 2018 letter was published in the Confucius Institute’s magazine, on page 55.

It is not clear if it is the same photo Marshall is referencing in her 2018 letter, or if there is an additional photo of her and Baobao.

Marshall’s 2018 letter was sent even after FBI Director Christopher Wray warned at a Senate Intelligence Committee hearing in February 2018 that the FBI has been monitoring Confucius Institutes on American campuses “for a while.”

“It is just one of many tools that they take advantage of,” Wray said, of the CCP. “It is something that we’re watching warily and in certain instances have developed appropriate investigative steps.”

Local paper Citizen-Times reported in September: “Despite campus closures, 34 Confucius Classrooms will remain in more than a dozen North Carolina K-12 districts across the state, plus a charter school.”

Both Secretary of State Michael Pompeo and National Security Adviser Robert O’Brien have been speaking out against the Confucius Institutes, which are embedded in American campuses and are arms of the CCP’s overseas propaganda apparatus.

He said on Wednesday that he and Secretary of Education Betsy DeVos sent letters to universities and K-12 administrators across the U.S. to warn how the CCP uses Confucius Institutes and Confucius classrooms to spread propaganda and to stifle academic freedom.

O’Brien spoke at the University of Nevada last week about the CCP’s “sophisticated” operation to influence American politics “from the university level, the Confucius Institutes, to influencing local mayors and through sister city programs and governors.”

“As Attorney General Barr said, and I agree with him 100 percent…Chinese influence operations are of a level magnitude higher than the Russian influence in our election,” he said.