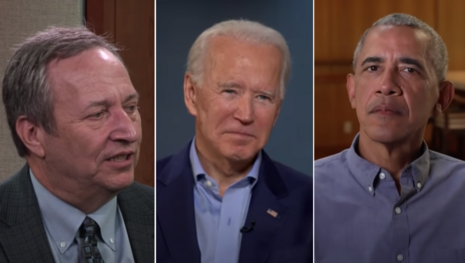 Progressive economist Larry Summers argued in a Feb. 4 op-ed that “much of the policy discussion [on the Biden COVID proposal] has not fully reckoned with the magnitude of what is being debated.” Summers pointed to two major issues: First, “there is a chance that macroeconomic stimulus on a scale closer to World War II levels than normal recession levels will set off inflationary pressures of a kind we have not seen in a generation.” The second issue for Summers was that if Biden’s proposal was enacted, “Congress will have committed 15 percent of GDP with essentially no increase in public investment to address” challenges such as infrastructure.

The Financial Times (FT) reported that Summers op-ed sparked a backlash from Democrats. Apparently, a free-thinking progressive is taboo for left-wing politics.

Summers defended himself to FT that “’a $1.9tn programme on top of the $900bn programme passed in December raises concerns about inflationary pressures and about limiting space for profoundly important public investments.’”

Summers further defended his arguments against the left-wing retaliation in a follow-up op-ed published Feb. 7. Summers addressed five questions criticizing his concerns. One question Summers answered tried to undercut his concerns about inflation:

Why so much concern about inflation? It’s below target and has not been a problem for more than a generation. In the new economy, the Phillips curve — the relationship between inflation and unemployment — is very flat, and so increased demand leads to little if any inflation. Moreover, if inflation happens, the Fed can certainly control it by raising interest rates.

Summers countered that simply dismissing the problem of inflation was dangerous:

[R]uling out risk scenarios because they have not been seen for a long time can be dangerous. Economists believed for a long time that the liquidity trap with zero interest rates was a historical curiosity. Yet it has defined the industrialized world for more than a decade. We have no experience with fiscal stimulus like that under consideration and the impact on inflation expectations.

Summers wasn’t the only one to have thrown a wrench into the Biden stimulus proposal. Fox Business reported Feb. 1 that the Congressional Budget Office (CB) assessed that “[t]he US economy will bounce back to its pre-pandemic size by the middle of the year without any emergency stimulus.”

Bill Maher sounds off ahead of Trumps CPAC speech

Woman killed by a drunk driver in NYC

Bill Maher sounds off ahead of Trumps CPAC speech

Woman killed by a drunk driver in NYC

Woman dies while climbing to her apartment during NYC power outage