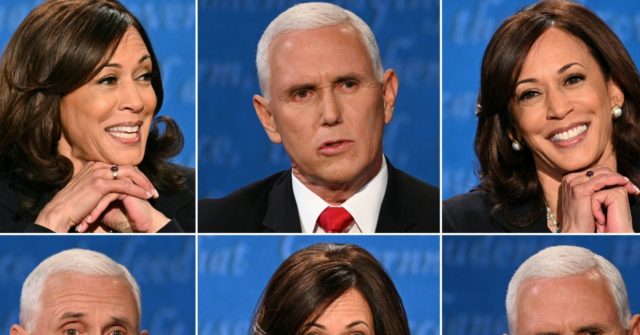 All the fake media can come up with to criticize Vice President’s Mike Pence’s stellar Wednesday night debate performance is some made-up nonsense about “mansplaining” and the “symbolic” distraction of a house fly landing in his hair.

That’s it. That’s all they got.

Which tells you he pretty much slaughtered Democrat vice presidential nominee Kamala Harris.

What a world we now live in. One where if a man makes a good point, fires off a solid rebuttal to a woman during a debate, he is now “mansplaining.”

You can see the tactic here. This is what the media have come up with to ensure a man can never win a debate against a woman.

Sorry. Let me rephrase that… This is the way the media have come up with to ensure a Republican man can never win a debate against a Democrat woman.

Just like the media reveled in the countless number of times Joe Biden interrupted Paul Ryan during their 2012 vice presidential debate and lost their minds when Donald Trump used that tactic against Biden at their first debate earlier this month, so too was there never any concern over “mansplaining” when Joe Biden debated Sarah Palin in 2008.

It’s all a cynical media tactic.

Heads I win, tails you lose.

What’s more, it was undoubtedly a pre-planned talking point coordinated between the media and Biden campaign.

There was a reason why Harris kept telling Pence, “Don’t lecture me.”

ABC News:: “Obviously Mike Pence, former television commentator, does have a very calm demeanor, but I think a lot of people were noticing some mansplaining going on tonight.”

CNNLOL: “Pence was a mansplainer-in-chief. He was Mr. Mike Mansplainer all night.”

MSNBC: “Women hate to be lectured by men, and she drove that point home.”

But-but-but… According to media calculations, Pence and Harris spoke almost the exact same amount of time.

It’s just the same shit over and over… They can’t accuse him of sexism, so he’s guilty of “mansplaining” for winning the debate.

If you want to talk about sexism, that’s sexism. Oh, the poor widdle weak Kamala can’t handle a man treating her like he would a man.

And then there’s the HouseFlyGate…

Right now the housefly that spent a few minutes with the vice president is the top trender on Twitter, not because everyday people made it a thing. It’s the far-left New York Times leading the charge, along with staffers from CNN, ABC, The Hill, etc…

2 minutes and 3 seconds — that’s how long a local TV news reporter from California clocked the fly’s screen time on Mike Pence’s head during the #VPDebate.https://t.co/1n1qZcBvXU

There appeared to by a fly on VP Pence’s head for that last answer pic.twitter.com/9o3cWxuWml

That’s all they got.