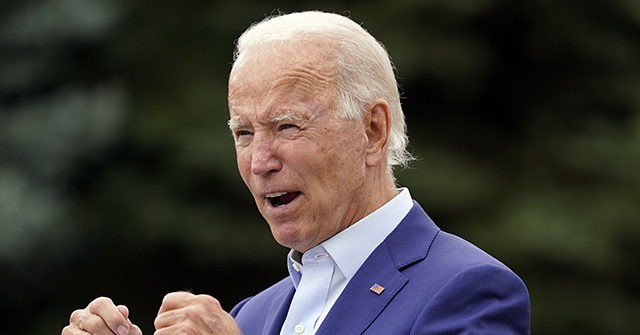 Joe Biden knows the media desperately want him to win, are covering for him, are helping him to hug the ball and sit on his polling lead, and while all of that is dishonest and unjust, it’s still hard not to enjoy Biden taking full advantage of his position by making the national media his bitch.

How else can you describe Biden’s adamant refusal, not only to answer questions, but questions as consequential to our country and democracy as…

Are you in favor of ending the filibuster in the U.S. Senate?

Are you in favor of packing the Supreme Court with the number of additional justice required for Democrats to get their way on every case presented to the court?

These aren’t silly questions. These aren’t personal questions. The death of the filibuster would hit America with something we haven’t faced in more than a century — majority rule. This means that a simple majority of 51 percent, or 51 senators, can do whatever they wish, pass any law they wish.

If you thought the federal government forcing you to purchase over-priced health insurance was outrageous, you ain’t seen nothing yet…

The whole idea of the filibuster is to cool the passions of the majority, to force the majority to slow down work with the minority.

As far as packing the Supreme Court…

Do you want to live in a country where a simple majority can do whatever it wants because 1) there is no filibuster, and 2) the party in power keeps adding Supreme Court justices until there are enough to rubber stamp whatever they do?

To argue these are consequential questions Biden refuses to answer is quite the understatement.

But he refuses, and has refused to answer since he was first asked because, as he repeatedly says, “Whatever position I take in that, that’ll become the issue.”

That was Biden’s answer during the recent presidential debate.

Biden also refuses to release a list of those he would consider for the court.

Biden also refuses to reveal his position on abandoning the filibuster.

And in return, the national media and debate moderators like Chris Wallace just roll over and take it because that’s how far they’re willing to go to humiliate themselves in order to drag Biden over the finish line.

Biden really made the national media his bitch Thursday in Arizona when he said to reporters, “You’ll know my opinion on court-packing when the election is over.”

And then he made them an even bigger bitch by telling them why he won’t answer….

“Look, I know it’s a great question for you all and I don’t blame you for asking,” he said, “but you know the moment I answer that question the headline in every one of your papers will be about that.”

And the media responded to that with, Okay. No problem. We get it.

Watching President Barack Obama turn the media into his bitch for eight years was one thing. This is something else entirely… And it’s hard not to laugh.

Biden is running for president. According to the polls, he’s the frontrunner by double digits. Still, he’s refusing to answer a question of major national importance and admits he’s refusing to answer out of the fear his answer will make news… And the national media’s partisan desire to see Trump defeated has turned them into such useless eunuchs with zero self-respect, they’re allowing Biden to get away with it.