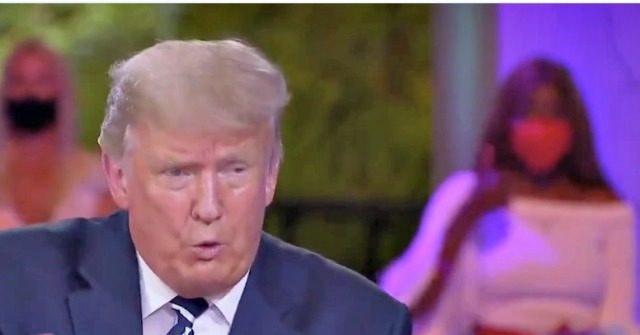 President Donald Trump participated in an NBC News town hall on Thursday night, but one woman seated behind the president immediately caught the attention of the viewers.

When President Trump denounced white supremacy, spoke against rioting and looting, and on other issues she quietly nodded in approval. She also gave a big thumbs up at one point as Trump was speaking.

She wore a red skirt, a red mask, and a white top.

The woman was one of many voters in the audience who were either leaning toward supporting President Trump or former Vice President Joe Biden. Some were also undecided.

Videos of the woman quickly went viral on Twitter.

NBC News and Savannah Guthrie might think that ANTIFA is just a group of peaceful protestors.

But this lady behind President Trump and the rest of America understands that ANTIFA is a dangerous, violent, extremists organization. pic.twitter.com/ThqHkTmPin

Director of Strategic Response for the President’s campaign, Francis Brennan, shared a video of the woman on Twitter. It earned 56,000 views in less than an hour after the town hall was finished.

Other Trump supporters cheered the woman on during the town hall.

This tweet goes out to the woman nodding for Trump. Retweet this so she sees it. She deserves a medal.

There is a woman behind President Trump, white shirt and red mask, who is nodding in agreement and giving a thumbs up.

Some verified critics of the president were very annoyed by the woman’s quiet agreement with the president and even accused her of being “staged” or a “plant” by someone who “paid” her.

Who’s that woman sitting directly behind Trump eagerly nodding along with everything he says? This is fucking ridiculous.

Same. This woman is nodding at things before he’s even finished his thought. It’s a psychological trick and I cannot believe no producer, no camera person, NO ONE is stopping it

The woman nodding behind Trump is my new least favorite human.

My new nemesis is the woman behind Trump who keeps nodding every time he lies.

I gotta say this. This black woman with a red mask on sitting behind Trump nodding in agreement with him for EVERY answer was so damn annoying‼️ Talk about staged. #Trump #TownHall pic.twitter.com/WsVki2yexf

Seriously that woman in the back is nodding like a bobble head in the back of a speeding Chevy. Her head is going to pop off. Obvious plant. Totally overacting.

@MiamiHerald I hope one of you is tracking down the woman sitting behind Trump on NBC and spent the whole hour nodding and giving thumbs ups. Maybe she was paid.

Trump spoke with some of the attendees of the town hall after it was over.

The nodding woman, as she is now known, is the woman in the red dress.

The woman in the red dress was a massive fan. She spent the entire show nodding every time he spoke. https://t.co/lBEg3AJFxz