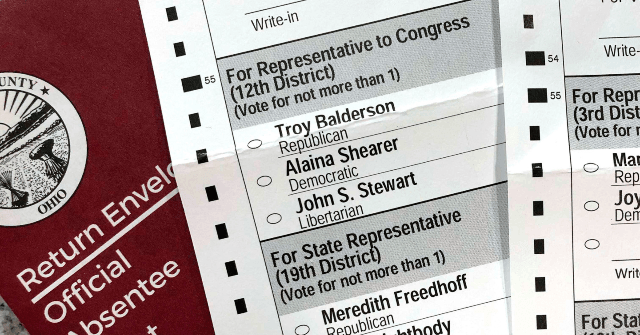 “The Board of Elections and vendor BlueCrest determined that 49,669 voters received an inaccurate ballot. Those ballots were part of the 237,498 mailed through the United States Postal Service,” The Franklin County Board of Elections said in a statement. “The board has already begun the process to print, stuff, and mail the 49,669 replacement ballots and expect them to be sent to the United States Postal Service within 72 hours for delivery.”

We can now confirm that 49,669 voters received an incorrect ballot.

Those voters will be contacted directly by the Franklin County Board of Elections and a replacement ballot will be mailed to them. Please visit https://t.co/wnMx1Tg0U4 or call 614-525-3100 if you have questions. pic.twitter.com/OMdOd2jWOS

The admission comes after Ohio Secretary of State Frank LaRose directed that new absentee ballots be mailed to Franklin County voters who received incorrect ballots. Earlier this week, the board said that a “significant number” of voters were mailed ballots meant for other individuals, as reported by WCMH.

On Wednesday, Franklin County board officials blamed a scanning machine for the issue with ballots.

A BlueCrest spokesperson issued a separate statement regarding the issue: “BlueCrest supplies the machines to the Franklin County Board of Elections (BoE) and provides training and onsite support to the County employees who operate them. We are working closely with the BoE to resolve the issue both by identifying the root cause of the problem and putting additional measures in place to mitigate a reoccurrence. The accuracy and security of the election process is of the utmost importance to both BlueCrest and the Franklin County Board of Elections.”