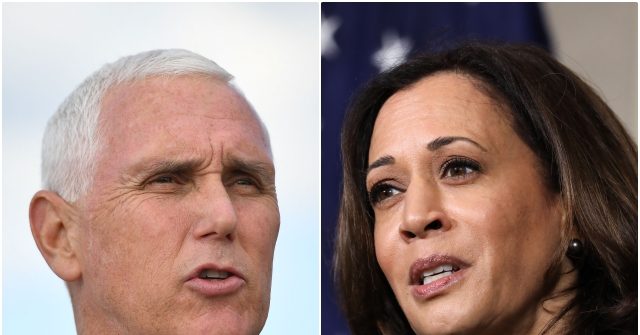 Sahil Kapur writes at NBC News that while Pence represents the Euro-centric immigration levels of the last century, Harris “reflects the changing demographics of the country” where the foreign-born population has ballooned to nearly 45 million.

Near the end of Pence’s childhood in 1976, 8 in 10 Americans identified as white and Christian. By his first year as vice president, 2017, that number had declined to 43 percent, according to the Public Religion Research Institute. [Emphasis added]

Today it is Harris, the first Black and Asian American woman to be included on a major party presidential ticket, who reflects the changing demographics of the country. [Emphasis added]

Harris, 55, embodies the melting pot that America has become. She’s a daughter of an Indian immigrant mother and a Jamaican father. She grew up with Hindu and Christian influences, identifies as a Baptist, and has a Jewish husband. Born in Oakland, California, she’s the first in her immediate family to be constitutionally eligible to serve on a U.S. presidential ticket. [Emphasis added]

In August, the New York Times called Harris the “face of America’s demographic shift,” noting that Since 2000, the number of immigrants arriving from India has more than doubled to roughly four million.

An analysis published by Pew Research Center acknowledged that the continuing rising foreign-born population, with no end in sight without reductions to immigration, is immensely helpful for Democrats’ political prospects.

“The substantial percentage point increase of voters who are not white as a share of the country’s overall electorate was largely driven by second-generation Americans — the U.S.-born children of immigrants — coming of age, as well as immigrants naturalizing and becoming eligible to vote,” they note.

The Washington Post, New York Times, the Atlantic, Axios, the Los Angeles Times, and the Wall Street Journal have all admitted that rapid demographic changes because of immigration are tilting the nation toward a permanent Democrat dominance.

“The single biggest threat to Republicans’ long-term viability is demographics,” Axios acknowledged last year. “The numbers simply do not lie … there’s not a single demographic megatrend that favors Republicans.”

In the upcoming 2020 election, about one-in-ten U.S. voters will have been born outside the country. Likewise, Hispanic Americans are set to outpace black Americans as the largest voting minority group in this year’s election.

Such realities have already been seen in the last presidential election.