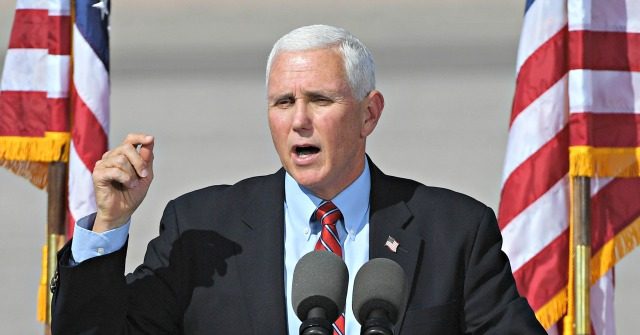 “Some people think we did all right,” Pence said with a smile as he recalled the debate the night before.

The vice president campaigned in Boulder City, Nevada, and Peoria, Arizona on Thursday.

Pence said during a rally in Nevada:

Pence said that America witnessed the different visions that Harris and Biden had for America.

“Joe Biden and Kamala Harris want higher taxes, open borders, socialized medicine; they want to abolish fossil fuels, use taxpayer funds for abortion; they want to defund the police, and if you couldn’t figure out last night, they want to pack the Supreme Court,” he said.

In Arizona, Pence boasted that the Trump administration had rebuilt the United States military and reformed the Department of Veterans Affairs. He also praised police officers serving throughout the country amidst the anti-police protests fueled by leftist Democrats.

“President Trump and I will always support the right of Americans to peaceful protest, but rioting and looting is not peaceful protest,” he said in Arizona. “Burning businesses is not free speech.”

He reminded supporters that he frequently saw President Trump behind the scenes and that they had become “very close friends.”

“I’ve seen him when the cameras are off and I’ll tell you what,” he said. “There’s never been a day gone by when President Donald Trump hasn’t gotten up and fought to keep the promises he made to the people.”

Pence also thanked supporters for praying for President Trump and First Lady Melania Trump after they both tested positive for the coronavirus.

“I spoke to the president this morning. He’s back to the White House and he and the first lady are doing great,” he said.