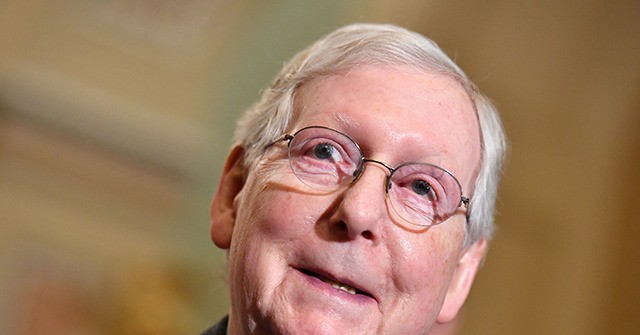 Tuesday, during an appearance on Fox News Channel’s “The Story,” Senate Majority Leader Mitch McConnell (R-KY) discussed the pending confirmation of Trump-appointed Amy Coney Barrett to the Supreme Court and what it could mean for the upcoming elections.

McConnell argued the time had passed to debate the process. He told host Martha MacCallum that it was time to discuss the nominee.

“We have been up against COVID since May,” he said. “We have had numerous hearings remotely, with senators calling in remotely, occasionally witnesses remotely. I think the nominee will be there in person. Some members of the committee may choose to be remote. We have been dealing with this since May. All of a sudden, it’s become disabling? This is just another effort to try to delay the process on this outstanding Supreme Court nominee that the president has sent up to the Senate.”

“The chairman has indicated that there are two dates that will be essential,” McConnell continued. “One is the [October] 15. One is the [October] 22. The nominee in — will come out on the 22nd and then be dealt with soon thereafter. So that’s the flowchart leading to consideration of the nomination. It’s about time we quit talking about process and start talking about the nominee herself, an absolute sterling choice. The president could not have picked a better nominee, outstanding scholar, wonderful family, seven kids, two adopted children, a special needs child as well, a very supportive husband, a working couple, quintessentially American. And it’s a great success story. And she will be a great member of the Supreme Court.”

“Well, what’s going to really help the Senate races, I think, are putting the Supreme Court justice front and center. Let the American people take a look at her, evaluate her credentials. Every single challenger to every one of my incumbents is opposed to this nominee, every single one of them. So, we will let the American people in each of these states that are hotly contested decide how important the United States Supreme Court is in casting their vote November 3.