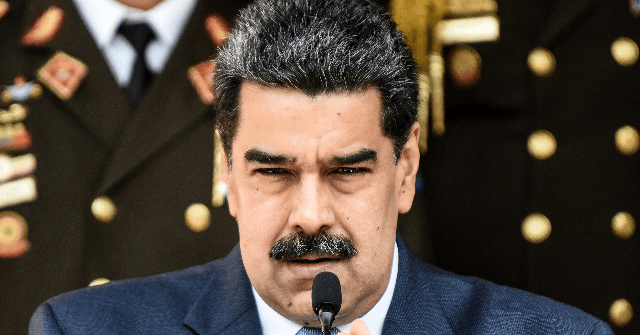 Socialist dictator Nicolás Maduro claimed in a nationally televised broadcast on Tuesday that Venezuela had developed several novel therapies to fight the Chinese coronavirus, including unspecified “miracle droplets” he claimed originated with a Catholic saint.

Following two decades of socialist rule, Venezuela boasts one of the world’s least developed healthcare systems, suffering from chronic shortages of nearly every drug on the World Health Organization’s (W.H.O.) list of medications necessary to run a functional system. Maduro has not invested significantly in hospitals or clinics, resulting in skyrocketing amputations (to prevent treatable infections from spreading), overcrowded and unrefrigerated morgues, and incidents like women giving birth on food ration lines becoming increasingly commonplace.

As Venezuela was uniquely unprepared for a pandemic, the Chinese coronavirus has resulted in a rapidly growing crisis. Maduro’s regime, which has not legitimately ruled the country in nearly two years, claims to have documented slightly over 85,000 coronavirus cases nationwide and only 714 deaths, which experts consider the product of likely significant undercounting of both cases and deaths. Maduro added to suspicions by initially declaring in April that the country had abruptly stopped diagnosing any coronavirus cases – a situation that has not occurred in any other country truthfully documenting the pandemic. Despite this, Maduro has repeatedly claimed that Venezuela is at the vanguard of developing treatments for the disease, praising its close ally Cuba for also helping with its alleged scientific achievements.

During Tuesday’s broadcast, presented as an update to the Venezuelan people from their leader on the nation’s participation in fighting the pandemic, Maduro listed several dubious coronavirus cures allegedly developed by Venezuelan scientists.

“You put some droplets under your tongue every four hours, it is yielding miraculous results,” Maduro said. “The little miracle droplets go directly, so you can take them with faith. Your body comes out refined, it eliminates COVID-19 [Chinese coronavirus.”

“Venezuela is almost ready, we just need the results of the molecular investigations because we have an antiviral that is going to be a slam dunk against the coronavirus, made by Venezuelan minds, with Venezuelan wisdom and science,” Maduro added, claiming that the “miracle droplets” were in Phase Three clinical trials.

Maduro also described them as “José Gregorio Hernández’s miracle droplets” and claimed that his health minister, Carlos Alvarado, took the drops and tested negative for the virus only three days after testing positive. José Gregorio Hernández was a Venezuelan doctor recently beatified by Pope Francis after the Vatican confirmed the veracity of an alleged miracle the doctor executed. Hernández died in 1919, so it is not clear what his relationship is to the alleged coronavirus droplet cure.

“We have a clinical study with more than 600 cases and we can say that we have a 96 percent rate of saving lives and recovery,” Maduro claimed.

The scientific community in the free world has not recognized ozone (O3) to have any medical uses. A study published in Europe in May suggested that ozone may be “highly effective at decreasing organ damage” in coronavirus patients, but has not been replicated sufficiently to guarantee that its results are common. America’s Food and Drug Administration (FDA) and Federal Trade Commission have banned the use of ozone therapy for coronavirus patients and warned consumers to avoid any marketing suggesting it is safe.

According to the FDA, ozone is “a toxic gas with no known useful medical application in specific, adjunctive, or preventive therapy.”

The declarations were the first in which Maduro claimed to possess a uniquely Venezuelan solution to the pandemic. In March, Maduro said at an event observing “National Day of the Doctors of the Homeland” that Venezuela would manage to contain the Chinese coronavirus with the help of a Cuban treatment.

Maduro referred to a combination of antivirals that Cuban has been promoting as a coronavirus cure known as interferons. Interferons were first used in 1957 and have no direct ties to the communist regime in Cuba. They also have no proven efficacy against the Chinese coronavirus.

Following the launch of Cuba’s campaign to popularize the use of interferons against coronavirus, three Cuban researchers warned that interferons could result in deadly damage to those taking it with no known benefit for coronavirus patients.

“When the Government of Cuba assures that the Interferon developed in Cuba cures the coronavirus, it is committing a serious crime against world public health, since this drug not only lacks any scientific proof, but also where it has been tested has already given null results of encouragement,” the doctors concluded.