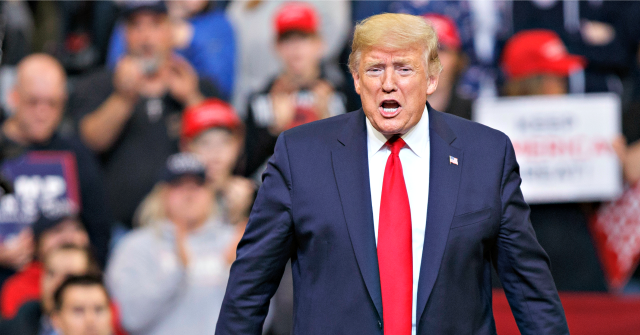 8:07 PM: Trump calls his shot and says he is going to win Minnesota because of people like Ilhan Omar, who Trump says “hates our country” and has “broken the law.” Crowd chants “lock her up.”

8:03 PM: Trump reminiscing about 2016 and the “tears that were flowing” from the completely unbiased anchors. Trump says the next debate moderator, Kristen Welker, is biased and deleted her whole social media account.

He goes back to saying Democrats want to fund extreme late-term abortions and pack the Supreme Court with 16, 19, 20 justices.

8:00 PM: Trump says he has the most energy in the history of politics and Biden’s “got the least.” He says Biden handed control over his party to the hard-core “militant left.” He says Democrats are now the party of socialists, marxist, and left-wing extremists. Trumps says Democrats will kill your jobs, dismantle your police departments…dissolve your borders, raise your taxes, destroy your suburbs.

Trump says Biden can’t say “law and order” because he will lose the “radical left.”

7:57 PM: Trump says “Sleepy Joe” doesn’t know anything about “specialty milk” and the USMCA. He says he is wearing a cap because of the 40 mph winds. He says he wishes Wisconsin had a Republican governor. He wants the state to open up and go back to school.

7:55 PM: Trump gets on stage with a “Make America Great Again” hat. Crowd chanting “USA! USA!” Trump says the crowd is “massive” and he doesn’t believe polls that have him “even” in Wisconsin.

“I was having a great hair day, but then I heard you had 40mph winds, so I put the cap on,” Pres Trump told supporters at his 2nd rally of the day in Janesville, WI. Trump narrowly won the state in 2016. It was critical to his victory. This is his 4th rally in WI this year. pic.twitter.com/jjrGcAX8J3

7:30 PM: Trump will deliver remarks on supporting law enforcement in Paul Ryan’s hometown. Air Force One is about to land.

Next stop: Janesville, Wis., where a crowd of thousands is waiting for him.

“You know who doesn’t particularly like America? Joe Biden supporters,” says @SenRonJohnson – warming up the crowd at @realDonaldTrump rally in Janesville, WI

With a little less than three hours until @POTUS takes the stage in #Janesville, the stadium is nearly full. #News3Now pic.twitter.com/8ItkJEbE1Z

Packed in for the President. Wisconsin locals wave off concerns about a Covid surge and fill a makeshift compound to hear Donald Trump, due here shortly. #uspolitics #7newsaustralia pic.twitter.com/6zaK7TReLu