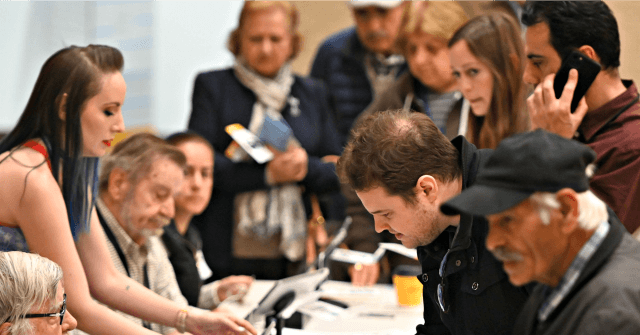 A slew of left-wing activist groups, former and current Democratic politicians, as well as anti-Trump celebrities, athletes, and corporations have teamed up and recruited over 600,000 “healthy, low-risk and diverse poll workers.”

The workers will staff in-person voting locations during early voting and on Election Day, assisting voters check in, understand their ballots, cast their vote, and even open and count mailed ballots, in order “to ensure a safe, fair election.”

Under the title Power the Polls, the initiative has the support of countless left-wing influentials helping promote the effort and is partnered with numerous far-left groups such as the Democracy Initiative, a coalition of 75 activist organizations including Soros-funded groups Demos, MoveOn, the Center for Popular Democracy (CPD), Common Cause, and more, which seeks a range of progressive goals that demand “reforming” democracy.

Despite the overwhelming attention given to mail-in voting, four in ten votes —  60 million ballots — are likely to be cast in person this fall, either early or on Election Day, which will likely result in a shortage of poll workers, as they tend to fall into an age bracket more vulnerable to serious illness from COVID-19.

As a result, Power the Polls aims to “be a part of the solution” by recruiting a new wave of poll workers from younger, more diverse populations that have not historically filled these roles.

In addition to ensuring that election technology functions properly and efficiently and assisting voters in both the voting and check-in process, Power the Polls workers will also help open and count mailed ballots.

According to Power the Polls, the states with the greatest need for additional poll workers are: Arizona, Florida, Georgia, Maine, Michigan, Minnesota, Nevada, New Hampshire, North Carolina, Pennsylvania, and Wisconsin.

Most election officials “are not used to recruiting outside of the usual suspects,” said Power the Polls co-founder and director Scott Duncombe.

Duncombe, who previously worked as a field organizer in New Hampshire for Barack Obama’s 2008 presidential campaign, also co-founded Pizza to the Polls, an organization that gained popularity after fundraising and providing pizza to polling places with long lines during the 2016 election. In early 2017, Duncombe’s group was quick to offer free pizzas to protesters demonstrating at JFK airport against President Trump’s 2017 temporary ban on refugees and nationals from seven Muslim-majority countries intended to improve the protocols for screening and vetting foreigners.

Early this year, Duncombe founded Democracy Delivered, which helps voters register to vote-by-mail and has partnered with TurboVote, a group funded by several prominent left-wing private foundations and defines itself as “an application that makes voting easy.”

Duncombe previously worked at the Soros-backed Alliance for Youth Action, Common Cause, and other progessive voting groups, many that are currently partnered with Power the Polls.

In recent months, the Fair Elections Center has worked alongside left-wing litigation groups in several swing states and was also a co-litigant in the successful 2016 lawsuit to restore felons’ voting rights in Virginia and was involved in a 2020 lawsuit to restore voting rights to convicted felons in Kentucky. The center’s current joint efforts with Power the Polls is funded by the left-wing Democracy Fund created by Pierre Omidyar, and many other wealthy liberals.

Power the Polls, and many of its partners, received tens of millions of dollars through left-wing donors, including the One for Democracy Fund co-founded by chairman of The Bail Project Michael Novogratz, the Soros-backed Open Society Foundation and other far-left mega donors.

Power the Polls lists 100 partners including activist groups, large corporations and several left-wing voter turnout organizations such as When We All Vote, co-chaired by Michelle Obama; Vote Save America, founded by top former Obama administration officials; And I Still Vote, a project of the Leadership Conference on Civil and Human Rights (LCCHR) backed by George Soros and Bill Gates; and More Than A Vote, founded by a coalition of black athletes, which aims to address voter suppression, combat systemic racism, and increase voter participation in black communities, and has partnered with the NAACP’s Legal Defense Fund to recruit volunteer poll workers.

Despite being a relatively new and unknown initiative, Power the Polls’ goal of recruiting 250,000 poll workers has been surpassed by more than double and currently counts over 600,000. The initiative has successfully managed to reach out to the most influential figures and groups on the left:

Stand Up America and Indivisible: Two left-wing groups founded in response to President Trump’s 2016 election and whose goals are “to organize and resist Trump’s dangerous agenda” and “to defeat Trump and his enablers.” Working with many Power the Polls partners and funders, the Soros-backed groups plan to mobilize millions of Americans should President Trump “contest the election results,” refuse to concede, or claim an early victory, as Breitbart News reported.

Sean Eldridge, president of Stand Up America and co-founder of Protect the Results, who claimed that “Trump is already laying the groundwork by declaring the result rigged, so we are sounding the alarm now,” has also promoted the initiative’s efforts.

Everytown: Financed by billionaire and failed presidential candidate Michael Bloomberg, Everytown is “the largest gun violence prevention organization in America,” with hundreds of chapters and a claim to nearly six million members. Bloomberg himself has raised over $16 million to help 32,000 felons in the swing state of Florida pay outstanding fines and fees to regain their voting rights, as Breitbart News reported.

The Center for Popular Democracy Action (CPDA): A network with over 50 local partners in 32 states, the Soros-backed group endorsed the Biden-Harris ticket, “is committed to helping Black and Brown communities participate at record levels,” is part of a coalition ready to mobilize after elections and is currently involved in a massive voter mobilization campaign in several swing states.

Power the Polls’ site prominently features a video of Trever Noah of The Daily Show, a feature of ViacomCBS’s Comedy Central — a founding partner of Power the Polls — promoting the effort.

Frequently using his platform to attack President Trump and his supporters, Noah has compared the president to a deadly cancer and deemed him a product of “white supremacy.” After Trump won the 2016 election, Noah appeared on CBS This Morning and accused Trump voters of being motivated by sexism and racism.

Leftist pop star Billie Eilish, who performed at the DNC and had once told whites that “you are privileged whether you like it or not” while claiming that blacks get killed “just for being black,” as well as gun control activists David Hogg and Mandy Moore, all posted videos in support of Power the Polls while encouraging viewers to sign up.

Hollywood actress and left-wing agitator Alyssa Milano, who has voiced support for defunding police and a “radical reconstruction of society” and, more recently, advocated trying the entire GOP “for treason,” has also called for followers to join Power the Polls.

Comedians Jimmy Kimmel, who chanted “Black lives matter!” at the 72nd Emmy Awards, and Chelsea Handler, who suggested President Trump only exonerates or pardons white people, also came out in support of the initiative.

While CNN’s Jake Tapper encouraged people to sign up as “nonpartisan” poll workers, others were open about their anti-Trump agenda.

Claiming that President Trump will try to claim a premature victory, Randi Weingarten, the President of the American Federation of Teachers who endorsed Joe Biden, encouraged others to join her as a poll worker.

We must count every vote!!! “Would Mr. Trump claim premature victory — as he did on behalf of the two Florida Republicans. “Of course he will try…We should protect & make safe all ways to vote- by mail, early or on #ElectionDay. Join me as a #PollWorker https://t.co/mtNW6pr9Af

Sen. Elizabeth Warren (D-MA) stated: “One way to fight back against this administration’s attempts to stir chaos, and suppress the vote? Become a poll worker in your community.”

One way to fight back against this administration’s attempts to stir chaos, and suppress the vote? Become a poll worker in your community.https://t.co/e1esmiyUii

Andy Richter, promoting Power the Polls, called for volunteers who “want to do something about our current political nightmare,” while LeBron James, seeking to recruit poll workers, included a Black Lives Matter hashtag in his tweet.

Indivisible head and Protect the Results co-founder Sarah Dohl said: “Trump is a loser trying to cheat his way to win” as she encouraged people to sign up as poll workers.

Max Berger, one of the leading participants in Occupy Wall Street, stated:

“Trump is recruiting an ‘Army’ to intimidate people on Election Day. This is a common tactic of authoritarian regimes. They’re trying to suppress the vote because they know they can’t win without cheating. They’re weak. Sign up to work as a poll worker: powerthepolls.org”

Trump is recruiting an “Army” to intimidate people on Election Day. This is a common tactic of authoritarian regimes. They’re trying to suppress the vote because they know they can’t win without cheating.

Yesterday was National Poll Worker Recruitment Day, and it had us thinking about a statement from YP4’19 Rana Al-Nahhas last month. ⬇️Check out this highlight below, about the impact of representation at the polls. #YP4 #BuildingPowerToWin #powerthepolls pic.twitter.com/cRWVMr3CzA

Take Back 2020 stated: “Trump wants to suppress our vote bc it’s the only way he can win. Anyone saying it’s a conspiracy theory clearly isn’t listening to the words coming out of the President’s mouth. Sign up: #PowerThePolls.”

These lies are attacks on democracy, plain & simple. Trump wants to suppress our vote bc it’s the only way he can win. Anyone saying it’s a conspiracy theory clearly isn’t listening to the words coming out of the President’s mouth. Sign up: #PowerThePolls https://t.co/qr8t2aURwL

In light of the COVID-19 pandemic, this November’s election will be critically different from previous ones in that polling stations throughout the U.S. will be managed by inexperienced, first-time volunteers and workers, some as young as 16, due to the absence of many older, experienced poll workers. These workers will also be charged with rapidly processing results to avoid an extended period of tabulation and most will be tasked to supervise and manage in-person voting in battleground states.

That many of them are recruited by and associated with left-wing activist networks, groups and individuals who are desperately pushing a Biden win, is even more cause for concern.

Though the initiative claims to be non-partisan, it has cooperated almost exclusively with the left, even incorporating leftist messaging, including Black Lives Matter imagery as well as references to George Floyd, throughout its posts.

President Trump, concerned that Democrats could use various means to “steal the election,” has urged supporters “to go into the polls and watch very carefully.”