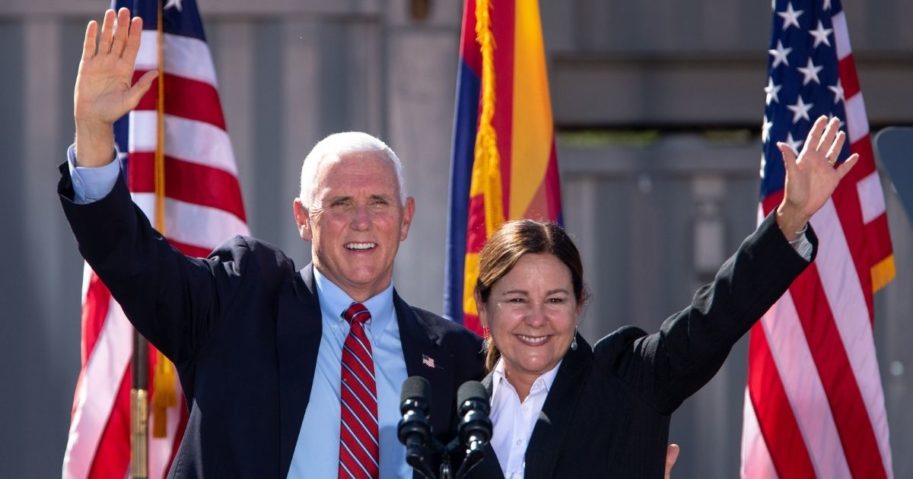 As it turns out, Mike Pence went through quite the adventure on his road to becoming vice president of the United States of America.

On Thursday, during a Trump 2020 campaign event in Peoria, Arizona, second lady Karen Pence opened for her husband.

During her talk, the second lady told the story of how she and her husband got into politics.

Thank you, Peoria! @KarenPence and I are here at @TYRTactical for one reason: Arizona and America need FOUR MORE YEARS of President @realDonaldTrump in the White House! It’s on! pic.twitter.com/vwDjwigW7q

TRENDING: Joe Biden Caught Red-Handed Misleading Americans About the Number of People Given Clemency While He Was VP

“Well, I get the job of introducing the vice president today,” Karen Pence told the crowd.

“And so I’m going to tell you a little story about our history of getting involved in politics.”

The second lady then shared that ever since the couple first began dating about 37 years prior, the now-vice president told her that he wanted to run for Congress.

Do you think Mike Pence has done a good job as vice president?

Pence then ran for Congress in 1988 on the theme of “faith, family and freedom.”

His ambitions, however, did not lead to success in the beginning.

For a while, they lived comfortably, until the couple felt that God was calling them to return to the political world.

“We were very comfortable. And I’ll just tell you, that’s usually when God puts your life in a blender and that’s what happened to us.”

RELATED: Trump Calls Kamala Harris a ‘Monster’ in His Debate Response: ‘Everything She Said Is a Lie’

Yet again, the couple ran on the theme of “faith, family and freedom.”

This time they won.

Several years later, after becoming governor of Indiana, Mike Pence saw even greater success when he got a call from Donald J. Trump.

“When we were getting to run for re-election, somebody called and had another idea for us,” the second lady said.

“After we had met the president and Melania and they had time to figure out what they wanted to do, the president called and this is what he said: ‘Mike, it’s going to be great.’ And Mike said, ‘Well, if there’s a question there, the answer is yes.’

“So we ran again on the theme of faith, family and freedom, and for four years, President Donald Trump has been fighting for your faith, your family and your freedoms.”

If the November election goes as well for the Trump administration, the Pences’ story will continue on in the White House for four more years.