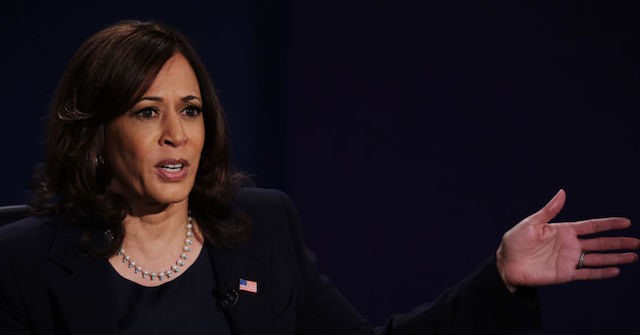 The deal, known formally as the Joint Comprehensive Plan of Action (JCPOA), required Iran to temporarily halt the development of nuclear weapons in exchange for the guarantor countries – Iranian allies China and Russia along with France, the United Kingdom, America, and Germany – easing sanctions on Iran established in response to its illegal nuclear weapons program. The result was a windfall of cash in the hands of the rogue Islamic regime, a U.S.-designated state sponsor of terrorism, that funded foreign adventurism throughout the Middle East, most prominently in Syria, Yemen, Iraq, and Lebanon.

Iranian military leaders regularly threaten the destruction of the state of Israel, a U.S. ally.

Harris defended it in response to a question about the nature of American foreign policy, which she described as being about “relationships.”

President Trump, she claimed, “betrayed our friends and embraced dictators around the world.” One of her examples to support this claim was Trump choosing to walk away from a deal brokered with Iran alongside China and Russia.

“Look at the Iran nuclear deal, which now has put us in a position where we are less safe because they are building up what might end up being a significant nuclear arsenal,” Harris said. “We were in that deal, guys – we were in the Iran nuclear deal with friends, with allies around the country [sic], and because of Donald Trump’s unilateral approach to foreign policy, coupled with his isolationism, he pulled us out and has made America less safe.”

Pence replied to the claim by noting that the Obama administration “transferred $1.8 billion to the leading state sponsor of terrorism.” The vice president appeared to be referring to a cash payment delivered in pallets to the Iranian regime on the same day that Iran chose to release American hostages – an apparently trade that the Obama White House adamantly denied was a bribe.

When President Donald Trump said in a 2018 interview that the deal gave Iran “$150 billion, giving $1.8 billion in cash — in actual cash carried out in barrels and in boxes from airplanes,” Politifact rated the statement “half-true” because the money was in pallets, not boxes.

The $1.8 billion does not include another $150 billion that Iran received from the nuclear deal in frozen assets around the world subject to sanctions.

Unlike Harris’s claims that the JCPOA prevented Iran from developing a nuclear weapon, provisions of the deal made public by the Associated Press show that the deal only required Iran to cease updating nuclear enrichment technology for the first ten years; after that, Iran could start “replacing its mainstay centrifuges with thousands of advanced machines.” Centrifuges are used to separate stable uranium isotopes from those that can be used to make weapons.

As of September, the U.N.’s International Atomic Energy Agency (IAEA) believes that Iran possesses over ten times the amount of enriched uranium that the JCPOA allows it to.