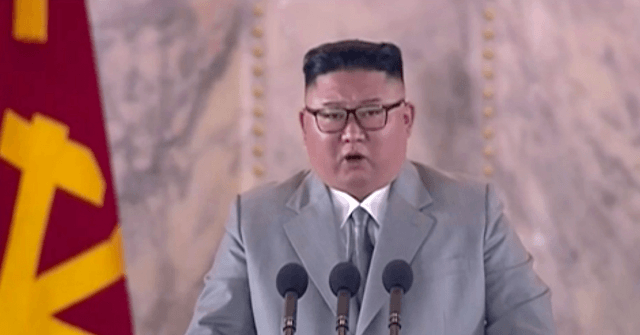 North Korean dictator Kim Jong-un told the audience at his address celebrating the 75th anniversary of the communist Workers’ Party of Korea (WPK) this weekend that he was “really sorry” for not living up to the expectations of the North Korean public.

North Korea typically celebrates the anniversary of its only legal political party, particularly those during milestone years every decade or half-decade, with lavish parades that the regime forced tens of thousands of people to partake in. Pyongyang did host a parade this year, where it claimed to debut new weaponry, but chose to stage the parade in the pre-dawn hours of Saturday. Kim reportedly gave his speech on midnight Saturday before the parade began. North Koreans then watched the festivities pre-taped on Saturday.

Experts say the planning may have been an attempt to limit the number of people crowding in public to prevent the spread of Chinese coronavirus. North Korea claims to have officially documented zero cases of Chinese coronavirus within its borders despite some of the world’s largest outbreaks occurring in its neighbors: South Korea, Russia, and the origin nation of the pandemic, China. Kim abruptly announced the construction of a new hospital this year and has locked down at least one major city, suggesting uncontrolled community transmission in the country.

Kim’s laments during his speech about his regime’s alleged inability to respond to the needs of the impoverished public also appeared to be a response to nationwide floods that devastated some of the nation’s most vital farmlands. Kim has made several public appearances in devastated areas, taking photos where he appears to be discussing the damage with locals.

“Our people have placed trust, as high as sky and as deep as sea, on me, but I have failed to always live up to it satisfactorily. I am really sorry for that,” Kim reportedly said on Saturday, according to the state newspaper Rodong Sinmun.

“Although I am entrusted with the important responsibility to lead this country upholding the cause of the great Comrades Kim Il Sung and Kim Jong Il thanks to the trust of all the people, my efforts and sincerity have not been sufficient enough to rid our people of the difficulties in their life,” Kim said.

“I solemnly swear once again in this place that I will live up to the people’s trust without fail even if my body is torn and crushed to pieces on the way of defending their great trust and that I will remain faithful to that trust,” Kim vowed.

The dictator went on to lament 2020 as a year full of “harsh circumstances,” both for North Korea and the entire world.

“At last on this glorious night we are greeting the Party’s founding anniversary of this year, which was beset with unprecedented difficulties; I don’t know why, but this fact alone moves me too much. … [A]t the beginning of this year, I had big worries and fear owing to the onset of the world health crisis and unfavorable situations around us,” Kim reportedly said.

Kim repeated the claim that North Korea has not documented a single Chinese coronavirus case, thanking the general public for staying healthy.

“I thought over what I would say first at this moment, when we will be looking back upon every page of our Party’s 75-year history filled with glory, but my heartfelt, sincere word for our people is only one, thanks. First of all, I thank them for being healthy free from disease,” Kim said. “I thank them for their good health without any one of them having fallen victim to the malignant virus.”

Kim applauded the communists for this “success” but said that Party officials had “undertaken to perform too many tasks and have taken too great pains” this year.

“They would say that defending their country, people and revolution is a task inherent to the People’s Army, but the pains they have taken are too great,” Kim said. “This is why I feel deep regret for them, and I feel pain in my heart as they are not all here at this glorious night with us.”

During the state television broadcast of the speech, South Korean media reported, Kim Jong-un paused his speech several times to wipe tears from his eyes.

Elsewhere in the speech, Kim sent regards to South Korea, wishing them well in their fight to eliminate the coronavirus threat. He nonetheless promised he would never dismantle North Korea’s “war deterrent,” a term commonly used in North Korea to refer to nuclear weapons, and that the nation must remain on alert for foreign threats. While paused with an armistice in 1953, the Korean War never officially ended, meaning North Korea remains at war with South Korea and America.

North Korea observers told the Korea Times that the tenor of Kim’s speech, particularly the displays of guilt and failure, were a rare sight in the country.

“It is important to look at why he has come to shed tears at such an occasion,” one expert, director of the North Korea division at the Korean Institute for National Unification Hong Min, told the Korea Times. “Underneath his message, one can sense that Kim is feeling a lot of pressure on his leadership. During the speech, he used terms like ‘grave challenges,’ ‘countless ordeals’ and ‘disasters unprecedented in history.’ This shows that he is having a really hard time governing.”

Kim has expressed remorse repeatedly this year for various failings of his regime. In July, Kim reprimanded the officials in charge of the construction of the Pyongyang General Hospital, whose construction was announced after the coronavirus pandemic began, for “serious problems” in funding the project.

Kim in particular condemned officials caught asking civilians for money to build the hospital. KCNA claimed Kim ““severely rebuked it [Party leadership] for burdening the people by encouraging all kinds of ‘assistance.’”

In August, Kim warned that his economic plan for the nation had failed to produce the outcomes he was hoping for.

“Planned attainment of the goals for improving the national economy have been seriously delayed and the people’s living standard has not been improved remarkably,” Kim said at a meeting of North Korea’s Central Committee.

General Robert B. Abrams, commander of U.S. Forces Korea (USFK), said in an interview in September that the Demilitarized Zone (DMZ), the border between North and South Korea, had become significantly more peaceful throughout the past year, in part because Kim had redirected his attention to managing several crises.

“With COVID-19 [Chinese coronavirus], that has accelerated the effects of sanctions on North Korea,” Abrams told the Center for Strategic and International Studies (CSIS). “There’s been some bumps and bruises along the way but, in general, I’d say North Korea is abiding by the comprehensive military agreement from September 2018. Compared to previous years, the reduction in tension is palpable, it’s identifiable, and you can see it.”