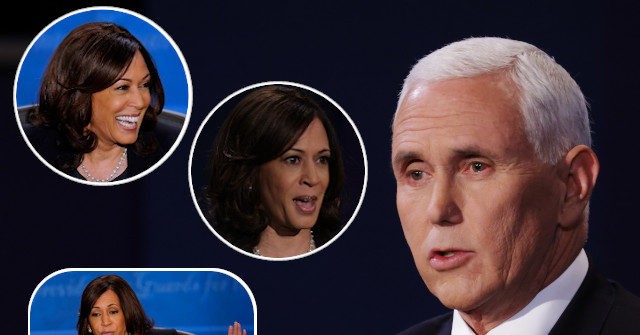 The Hollywood Reporter has joined the stampede of corporate media outlets using the word “mansplaining” in an apparent attempt  to portray Sen. Kamala Harris (D-CA) as a heroic victim of the alleged sexism that dominated Wednesday’s vice presidential debate.

“If Trump did his best to get his picture under the definition of ‘alpha male’ in the dictionary last week, Pence’s portrait might be found under ‘mansplainer,’” TV critic Inkoo Kang wrote in her Reporter review, titled “Kamala Harris Rises Above a Mansplaining Mike Pence in Vice Presidential Debate.”

She added that the vice president looked like a “sexist jerk.”

“Pence appeared obnoxious, condescending and not altogether present in the moment as he ran roughshod over the two women on the stage and kept addressing issues the moderator had moved on from.”

Kang failed to mention that Vice President Pence and Harris received roughly the same amount of speaking time, with Pence clocking in at 36 minutes and 27 seconds, and Harris coming in just three seconds under that. She also omitted the fact that both the vice president and Harris spoke over the moderator during the debate and frequently veered off topic.

During the debate, Kamala Harris made a show of insisting that the vice president was being rude by regularly exclaiming “I’m speaking!” and “I will not be lectured!”

A slew of mainstream news outlets picked up on her signal, coming together in lockstep to saturate airwaves and social media with the word “mansplaining.” Outlets including ABC News, NBC News, and CNN used the term in their post-debate coverage to describe the vice president’s debate style.

In her Reporter review, critic Inkoo Kang claimed that the American public has a “lingering distrust of unruly women,” adding that some viewers may have been “put off by Harris not receiving every one of Pence’s lies and insults with a forgiving, maternal grin.”

The critic concluded on a note of Kamala Harris as a victim of mansplainers: “There was a woman who had to ask, repeatedly, to talk without interruption.”