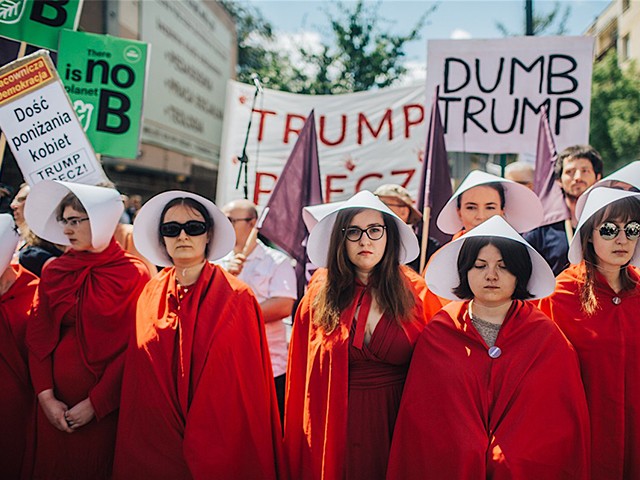 A group of women dressed as characters from the dystopian drama The Handmaid’s Tale flocked to U.S. Supreme Court on Monday to protest the confirmation process for Judge Amy Coney Barrett.

About a dozen protesters joined the group of women wearing white nun’s coifs and red flowing robes as the confirmation hearings begin in the U.S. Senate.

Leftist protesters have taken to wearing the garb of the fictional religious order from Canadian author Margaret Atwood’s 1985 book, The Handmaid’s Tale, since the book became a popular series on the streaming service Hulu.

Atwood’s dystopian novel is an attack on Christianity and male domination, and recent protesters have glommed onto the book’s symbology for demonstrations at least since 2017 when the TV series debuted. In the book, most women are stripped of their freedom and forced into a caste system, including sexual slavery, to serve the masters who run America after the United States’ fall.

Using the book’s premise, leftist protesters claim that President Trump’s nominee would “eliminate” American’s health care, and could lead to the overturning of Roe v Wade, the 1974 Supreme Court decision that forced the states to allow abortion on demand.

Still, Barrett is already on record as saying that it is highly unlikely that women’s ability to access abortion would be eliminated.

Speaking at the University of Florida in 2016, Barrett said, “I think don’t think the core case – Roe’s core holding that, you know, women have a right to an abortion – I don’t think that would change. But I think the question of whether people can get very late-term abortions, how many restrictions can be put on clinics – I think that would change.”

Multiple Storefronts Are Boarding Up Windows And Entrances Ahead Of Possible...

Multiple Storefronts Are Boarding Up Windows And Entrances Ahead Of Possible...