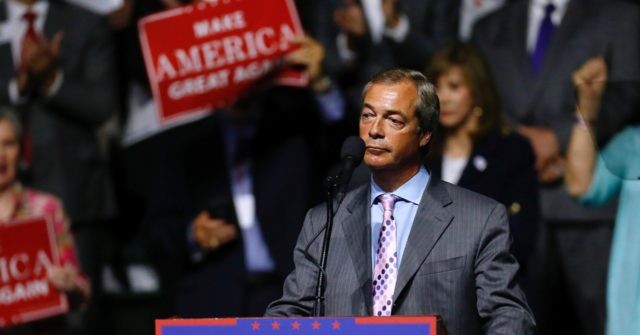 The long-time Trump ally said that the 2020 election is feeling like “2016 all over again”, pointing to polls produced by CNN and “other anti-Trump media outlets” showing a lead for the former vice president.

Writing in the Sunday Express, Mr Farage referenced a poll conducted by the same British paper which saw the President leading in battleground states as an indicator that “once again” the mainstream media has got it wrong, quipping: “You might even call it Fake News.”

“Back in 2016, I stuck my neck out and not only backed the Trump campaign but also predicted he would win. This was treated [with] much hilarity at the time from the great and the good. I think that those same people are all in for another shock on November 3,” Farage wrote.

Mr Farage hailed President Trump’s foreign policy successes, in particular the peace agreements signed between Israel and the UAE and Bahrain, as well as keeping the United States out of “more endless wars”.

He also pointed to Trump’s support for Britain and the pro-sovereignty Brexit movement.

“Whether you like Trump’s style or not, one thing is for certain; that this is the most Pro-British President for many years. By contrast, Joe Biden was Obama’s deputy when he said Britain would be back of the queue if we dared to vote for Brexit,” the Brexit leader said.

Mr Farage added that Biden “is keener on the relationship with Ireland than he is with us, sees Brexit as a mistake and I do not see any prospect of a free trade deal with the USA under President Joe Biden.”

“The special relationship is vital for post-Brexit Britain and will only be safe in Trump’s hands,” he concluded.

In contrast to the arch-Brexiteer, ministers in Boris Johnson’s government are reportedly preparing for a Biden victory, with internal computer modelling giving the Deleware Democrat a 70 per cent chance of beating out Trump in the November election.

A senior Tory told The Times that “they’re writing off Trump in No 10 now,” and that Mr Johnson has been warned that Biden could win in a landslide, taking control of the presidency, the Senate, and the House of Representatives in the process.

Fearful of the repercussions of a Biden presidency, members of the British government have reportedly been reaching out to Democrat politicians and Biden allies. Foreign Secretary Dominic Raab recently met with House Speaker Nancy Pelosi as well as “Biden whisperer” Senator Chris Coons and Democrat Congressman Richard Neal.

British diplomats have warned that the relationship with the United States under a Biden presidency will be “cool” as a result of Prime Minister Boris Johnson’s previous statements about the Obama administration.

‘Resentment’: Anti-Trump Former UK Ambassador Predicts a Biden Presidency Would Not Be Friendly to Boris https://t.co/AwMVAEERVA

In a 2016 column, Mr Johson criticised President Obama for intervening during the EU referendum, standing against the Brexit movement. In the column, Mr Johnson said that the move by Obama to remove the bust of Sir Winston Churchill from the Oval Office was seen by some as a “snub to Britain” and a “symbol of the part-Kenyan President’s ancestral dislike of the British Empire.”

A British diplomat said: “They remember that. Democrats also regard Trump as appalling and disgusting and there will be a penalty for people who sucked up to Trump. Angela Merkel didn’t. Macron did and then got tough. The Democrats don’t much like Brexit.”

Other diplomats in America have sent back telegrams to the United Kingdom warning that a Biden administration would seek to secure a revival of the Trans-Pacific Partnership (TPP) and a deal with the EU rather than a bilateral agreement with Britain.

Mr Biden suggested in September that if the United Kingdom does not submit to European control over Northern Ireland then the U.S. would punish Britain, saying: “We can’t allow the Good Friday Agreement that brought peace to Northern Ireland to become a casualty of Brexit.”