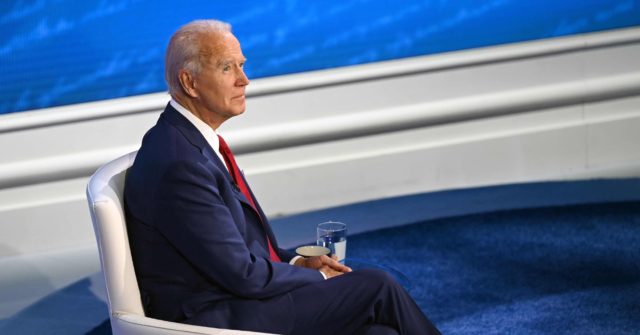 The former vice president told an ABC News town hall on Thursday evening that the president told people to put “bleach in your arm” and therefore should not be trusted to pronounce whether a potential coronavirus vaccine was safe or not.

As Breitbart News has noted in previous fact checks:

Trump never told anyone to inject bleach, much less in their arm. Nor did he tell anyone to injest bleach — another common Democratic Party talking point. On Thursday, Speaker of the House Nancy Pelosi (D-CA) claimed — falsely — that Trump told people to “swallow Clorox.”

PELOSI: President Trump “is trying to have the Constitution of the United States ‘swallow Clorox’.”

As Breitbart News has noted, and as the transcripts of White House press briefings confirm, Trump was discussing the future use of experimental ultraviolet light technology to disinfect surfaces and remove the coronavirus. The UV technology is already being used to disinfect offices and other spaces. Trump wondered openly whether it might be possible to “inject” UV light into the body — a technology that is currently in development, and which was reported in the media just days before.

When he was asked a follow-up question about whether he thought disinfectant should be “injected into a person,” Trump said no: “It wouldn’t be through injection. We’re talking about through almost a cleaning, sterilization of an area.”