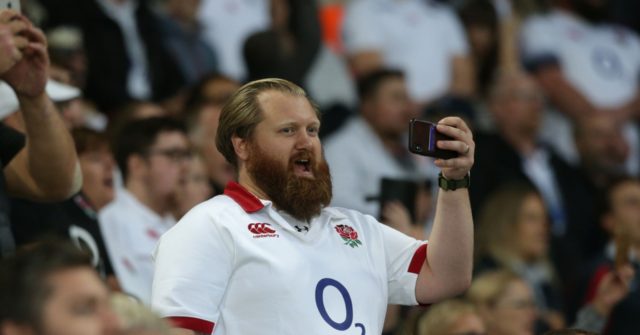 England rugby fans were granted permission Friday to continue singing “‘Swing Low, Sweet Chariot” by the sport’s governing body, but only on the express condition they agree to being “proactively” re-educated on the song’s “history and provenance.”

As Breitbart News reported, in June the Rugby Football Union (RFU) said it would review the song’s use by England fans because of its claimed links with slavery.

Los Angeles-based Prince Harry, who is patron of the RFU, supported the review.

Now it has been announced the RFU will use social media to educate supporters and help them correct their thinking, in addition to “providing platforms for diverse voices across the game”.

The song was written by Wallace Willis, a freed Oklahoma slave, after 1865 and has been long associated with black spiritual gospel music.

It was adopted by rugby fans in England in 1988 when England beat Ireland at Twickenham following an impressive come-from-behind win.

It has been sung at matches involving the national team ever since while artists including UB40, Ladysmith Black Mambazo and Ella Eyre have released their own rugby-inspired versions.

According to Friday’s announcement, the RFU has assumed the role of social re-educator, saying it is “committed to improving diversity and inclusion” at a time when the intersection between politics and sport has become a global issue.

A rugby fan has been banned from his club’s stadium for praising a girl who refused to “take the knee” and criticizing “Marxist extremism and intimidation.” https://t.co/JxFaiTpiwI

“The RFU needs to step up its efforts to improve diversity and inclusion across our game,” said RFU chair Andy Cosslett, according to the BBC.

Cosslett believes, “we are living through testing times” but said he was determined rugby would “grasp the opportunity” to reflect modern society as he sees it.

“We have worked hard to understand our starting point and are now under way with a plan that we are confident will produce big improvements in our diversity and inclusion over the next few years,” he concluded.

As Breitbart News reported, as far back as 2017 calls were made to prohibit rugby fans from singing the anthem because it allegedly represents “cultural appropriation.”

Josephine Wright, a professor of music and black studies at the College of Wooster in Ohio,  told the New York Times: “Such cross-cultural appropriations of U.S. slave songs betray a total lack of understanding of the historical context in which those songs were created by the American slave.”

Music history professor Arthur Jones was also upset with England rugby fans for singing the iconic song. He told the newspaper he is saddened that the meaning is lost when crowds use it to support the England rugby team. He said:

I feel kind of sad. I feel like the story of American chattel slavery and this incredible cultural tradition, built up within a community of people who were victims and often seen as incapable of standing up for themselves, is such a powerful story that I want the whole world to know about it. But apparently not everyone does.

Both academics hit out at the slavery lyrics being used to make money for the Rugby Football Union, sponsors and musicians.

They claimed many supporters were unaware of the song’s roots and that added another reason for them to refrain from singing until they could be re-educated.

Taking a stand has new meaning in heavily litigated election