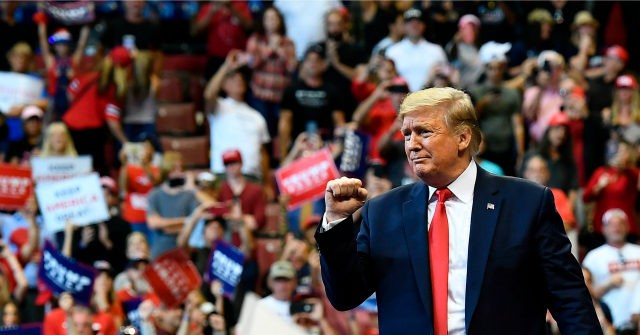 President Donald Trump will return to the campaign trail on Monday, October 12, hosting a rally in Sanford, Florida.

The president has remained off the campaign trail for over a week after contracting the coronavirus; testing positive for the virus last Thursday.

His last rally was in Duluth, Minnesota, on September 30, after the first presidential debate.

On Thursday, the president’s physician, Dr. Sean Conley, said in a memo he anticipated that Trump could return to public events by Saturday.

“Saturday will be day 10 since Thursday’s diagnosis and based on the trajectory of advanced diagnostics the team has been conducting, I fully anticipate the president’s safe return to public engagements at that time,” Conley said.

Trump was originally scheduled to appear in the second presidential debate on Thursday, October 15, but after the Commission on Presidential Debates unilaterally announced plans to make the debate virtual, the president refused to attend.

“There is, therefore, no medical reason why the Commission on Presidential Debates should shift the debate to a virtual setting, postpone it, or otherwise alter it in any way,” Trump’s campaign manager Bill Stepien said on Thursday.