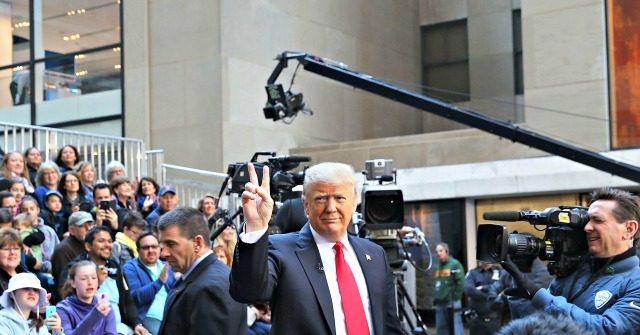 President Donald Trump on Thursday said that a scheduled town hall with NBC News was a “setup” against his campaign.

“You know, I’m being set up tonight. I’m doing this town hall with “Con-cast,” Trump said, using his favorite nickname for Comcast — the parent company of NBC.

Trump spoke about the upcoming town hall during a campaign rally in North Carolina, just hours before the town hall was scheduled to take place in Miami, Florida.

“I’m doing it, and it’s NBC. The worst,” Trump continued. “Home of ‘Sleepy Eyes’ Chuck Todd and some others.”

Trump recalled that NBC did a town hall with former Vice President Joe Biden earlier in October that was ridiculously easy.

“They gave Joe Biden, a week ago, a town hall, and it was meant for children,” Trump said. “They asked him questions that a child could answer, any child. A smart child, not such a smart child … it was a joke.”

Trump said that when NBC representatives reached out to him for a town hall with NBC host Savannah Guthrie, he agreed.

“I figured what the hell, we get a free hour of television,” Trump said, and added wryly, “And we have Savannah Guthrie, she’s always lovely, isn’t she?”

Trump said it would be interesting to see the difference between how NBC handled his town hall versus the one they did for Joe Biden, whom he called “a guy who couldn’t put two sentences together.”

“So I’ll see you later on, NBC,” Trump concluded. “I look forward to it. We’re going to be doing it from Miami.