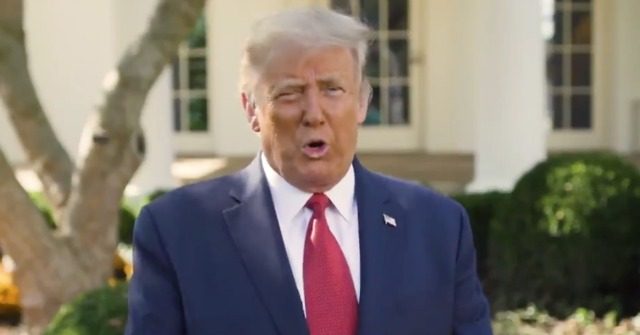 President Donald Trump on Wednesday described his illness with COVID-19 as a “blessing in disguise” because of his treatment with the experimental drug Regeneron.

“I think this was a blessing from God that I caught it. This is a blessing in disguise,” Trump said in a video posted to social media.

A MESSAGE FROM THE PRESIDENT! pic.twitter.com/uhLIcknAjT

The president said that when he went to Walter Reed Hospital, he asked his doctors about taking Regeneron’s drug to treat COVID-19. The company provided the drug to Trump in response to a compassionate use request from his doctors. The drug is an antibody cocktail called REGN-COV2.

“I went in, I wasn’t feeling so hot, and within a very short period of time then they gave me Regeneron … I think this was the key … It was like unbelievable, I felt good immediately,” Trump said.

“To me, it wasn’t therapeutic, it just made me better,” he continued. “I call that a cure.”

The president also promoted a similar antibody drug under development by Eli Lilly and Company seeking approval from the Federal Drug Administration.

“That’s what I want for everybody, I want everybody to be given the same treatment as your president, because I feel great,” he said.

Trump said he wanted to make the drug available for the rest of Americans and also make it free.

Trump admitted that the COVID-19 vaccine would not be developed before the election, despite his best efforts to get it done.

“I think we should have it before the election, but politics gets involved and that’s ok. They want to play their games, it’s going to be right after the election,” he said.