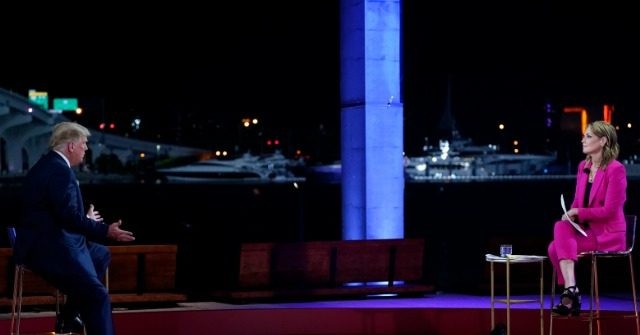 President Donald Trump on Thursday, during a town hall in Miami with NBC News, denounced white supremacy yet again.

Savannah Guthrie, the moderator of the town hall, asked the president why he hesitated to denounce white supremacy in the first presidential debate.

“You always do this,” Trump replied. “You’ve done this to me, everybody … I denounced white supremacy.”

Amid some crosstalk with Guthrie, Trump repeated, “I denounced white supremacy for years, but you always start off with the question.”

Trump asked why NBC News never asked Biden whether or not he denounced Antifa.

“I denounce white supremacy, what’s your next question?” he replied.

Guthrie accused the president of being “hesitant” to do so.

“I denounce white supremacy. Frankly, you want to know something, I denounce Antifa and I denounce these people on the left that are burning down our cities, that are run by Democrats,” Trump continued.

Guthrie interrupted to ask Trump about the conspiracy theory QAnon.

Trump said that he did not know too much about the group, but said he agreed with them about hating pedophilia.

“Let me just tell what you … I do hear about it is. They are very strongly against pedophilia, and I agree with that,” Trump said.