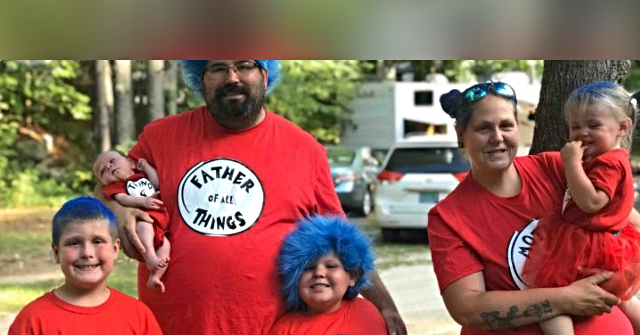 A Maine community is rallying behind a mother of four who is fighting a rare cancer that takes place in fatty tissue.

When Patten became pregnant with her two-year-old daughter, she noticed a small lump in her right thigh. Doctors watched it, and Patten did not experience any pain or other symptoms, and the lump went away by the end of the pregnancy.

This year, when she was pregnant with her fourth daughter, a lump reappeared in the same spot as before.

“It came back and it swelled up to ten and half by 11 centimeters,” Patten said.

Doctors said undergoing an MRI would expose her unborn daughter to harmful chemicals. Her fourth daughter, Cydney, was born in good health in early June.

Removing the cyst did not take place until August due to the number of surgeries postponed by the coronavirus pandemic.

The tumor was then sent to the Mayo Clinic to be analyzed. In September, doctors broke the news to Patten that she had myxoid liposarcoma, a rare cancer that embeds itself in fatty tissue, and referred her to the Dana Farber Cancer Institute for treatment.

Luckily for the family, a GoFundMe account had been set up by one of the community members on their behalf to raise money for the family’s expenses, including travel and lodging, while Patten is undergoing treatment.

Patten’s prognosis will not be known until she sees the experts at Dana Farber on Thursday, but her family and her community is hoping for a full recovery.