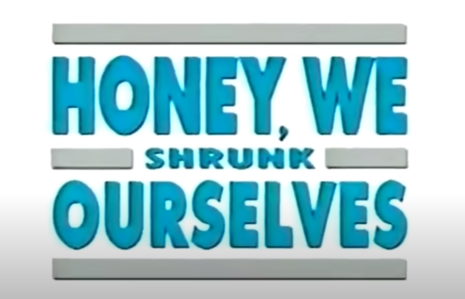 We’ve reached a point of media insanity where liberal outlets are trying to convince people that pollution causes their private parts to shrink.

Sky News, PinkNews, VICE, Business Insider and TMZ all pushed stories propagandizing a bonkers theory from a new book by Icahn School of Medicine at Mount Sinai Professor of Environmental Medicine & Public Health Shanna Swan. Swan’s theory alleged that “Penises are shrinking and genitals becoming malformed because of pollution,” according to the Sky News characterization. None of the outlets mentioned that Swan was a donor to President Joe Biden, according to Federal Election Commission records. Biden is planning to spend between $3 trillion and $4 trillion to juice the economy again, but “[t]ackling climate change and shifting to clean energy will underpin virtually every part of the package,” The New York Times reported.

Sky News, PinkNews and VICE parroted Swan’s fear-mongering that pollution-induced shrinking “penises” was an “‘existential crisis,’” reflected in decreasing fertility rates. PinkNews panicked that “global warming is coming for your penis.” It continued: “If that’s not a wake up call, we don’t know what is.” TMZ sounded the eco-extremist alarm too: “And you thought a cold pool was bad … sound the alarm!!!” Business Insider’s story on the matter was headlined, “Boys are being born with testicles in the wrong place, and pollution could be to blame.”

VICE’s report was arguably the most cringeworthy. Its entire story on “Shrinking Human Penises” was headed up by an image of phallic-shaped fruit and vegetables. 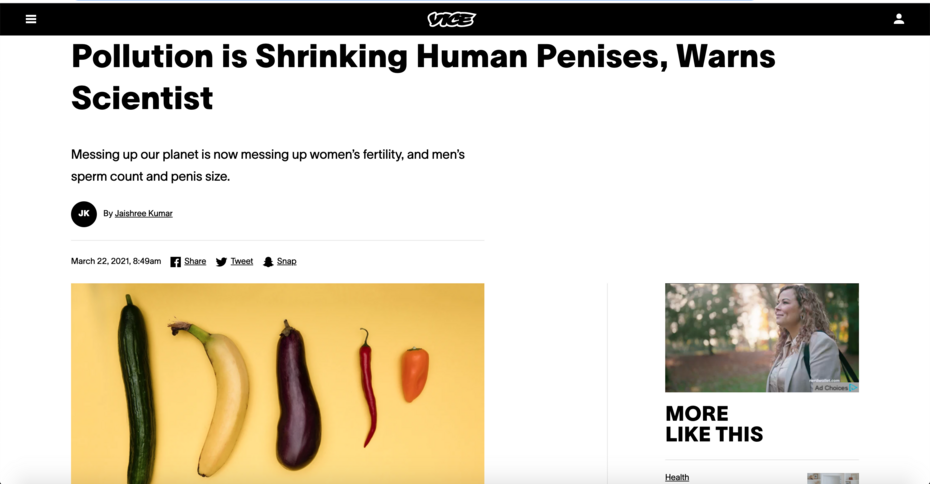 By now, we all know that humans have done a fair bit to fuck up our planet. Pollution—that big bad wolf that is the result of many of our activities—has messed up not just our lives but that of other creatures we share this planet with too. It’s damaged polar bears’ dicks and given ‘limp’ penises to otters. Now though, completing the circle of life itself, it’s coming for human erections too.

What was the culprit according to Swan? “[P]hthalates, a chemical used when manufacturing plastics that impacts the hormone-producing endocrine system,” Sky News summarized.

The idea that lower sperm counts were caused by “endocrine system” disruptors was a rehashed notion that Swan had been pushing for years. JunkScience founder Steve Milloy has been critical of Swan’s work on the matter as recently as 2019. Milloy said that Swan and others have been “constantly claiming that sperm counts are declining and that endocrine disruptors might be responsible.” Swan had previously blamed pesticides, another endocrine disruptor as a potential culprit behind lower sperm counts.

MRC Business reached out repeatedly to Swan for comment through phone, email and Twitter, but has received no response as of the publication of this piece.

Israel says it struck targets in Syria after missile attack