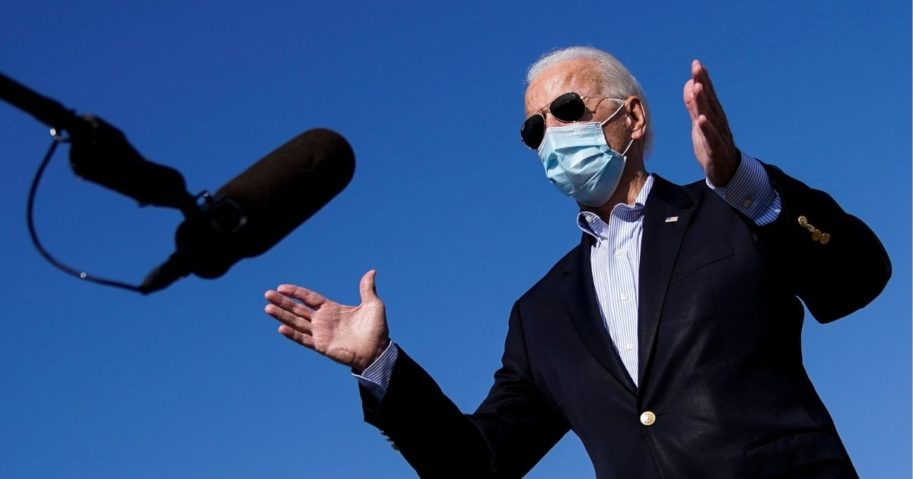 No one truly knows how the election will play out. We do, however, know how the media want it to go.

The continuing mainstream media blackout regarding emails reflecting Hunter Biden’s nefarious activities in Ukraine as well as sordid implications of father Joe’s complicity and possible financial gains would have been blowout news in a normal year — but not so much when Donald Trump is on the ballot.

Just think of the media circus if the roles were reversed and Don Jr. or Eric Trump were the ethics-challenged child at issue.

Indeed, we have been forced to watch from the sidelines as Big Tech exerts its enormous clout in shutting the story down. Adding insult to injury, Mr. Biden has cited the shutdown as cover for his continuing failure to respond. Orwell must be spinning in his grave.

Recall the old metaphor about inappropriately placing one’s hand on the scale of justice. A typically left-leaning media is now employing boulders in order to tip the election to their favored candidate.

TRENDING: Big Tech CEO Emails All 10 Million Customers Warning a Vote for Trump Is a ‘Vote Against Democracy’

Should the president prevail — and with him a Republican Senate — look for a serious effort to combat the ever-growing abuses of Silicon Valley regarding how, when and even whether the public receives political news.

Yes, many conservatives have finally had their fill of this dangerous game. A contingent of First Amendment-friendly GOP members will lead in what promises to be bruising fights over liability and antitrust protections currently enjoyed by the social media giants.

Speaking of those for whom this election is a very big deal, that ever-growing, loose confederation of POTUS-hating NeverTrumpers have serious skin in the game.

Do you think the media is putting its thumb on the scale for Joe Biden?

For these shut-out GOPers, the continued employment of Mr. Trump as the leader of the free world presents an existential threat. They are the establishment, and they want their status quo back. But theirs is an interesting quandary. Think about it.

A Trump win raises real questions about their continued relevance on the national political stage. After all, a one-off win over a polarizing and unlikeable Hillary Clinton can be rationalized away, but a second win over good ole Amtrak Joe after four years of brutal resistance and in the midst of a worldwide pandemic would show the world a new main street, America first-oriented GOP is here to stay.

Another four years outside the tent for these Lincoln Project types would indeed be hard to swallow as their temporary Democratic allies will surely jettison them in a heartbeat. Who needs temporary allies with no push inside their party? In any event, two losses to the great devil Trump will have the Democrats preoccupied with their own intra-party problems.

A Trump loss presents a different set of issues. A few jubilant NeverTrumpers may get rewarded for their efforts with goodies such as appointments, but ascendant progressives would have little tolerance for newly arrived, right-of-center Republicans in their neighborhood.

For just one example, John Kasich’s fiscal conservatism (let alone pro-life record) would never sit well with the Bernie bros and AOC types who will be directing policy in the new administration.

If you doubt my opinion, take a good look at last week’s threatening letter to Mr. Biden, issued by uber-left progressives demanding that he eschew corporate America from his new administration … or else. Trust me, this time the uber-lefties mean business.

RELATED: Mike Huckabee: This Year’s Election Will Test if Big Tech Billionaires Can Steal an Election

But how Trump-supporting Republicans would view the turncoats is even more interesting.

Most would view their former brethren with jaundiced eyes. Those who fought — and lost — the re-election effort would require the NeverTrumpers to own the Biden/Harris legacy, especially if it proves to be the next installment of “Progressives Gone Wild.” Some of the anti-Trumpers may not care about being identified with the pseudo-socialist, open-borders crowd, but others surely would.

For the latter group, it will be a long, uncomfortable road ahead.

The views expressed in this opinion article are those of their author and are not necessarily either shared or endorsed by the owners of this website. If you are interested in contributing an Op-Ed to The Western Journal, you can learn about our submission guidelines and process here.

China prepping for mission to bring back material from moon

China prepping for mission to bring back material from moon

‘Fit and healthy’ wrestler, 19, dies soon after testing for COVID-19