Charlotte, NC — Here are FEE, we predicted from the beginning of the pandemic that Congress’s decision to create an unemployment benefits system paying most individuals more on welfare than they earned by working would backfire. We weren’t the only ones. The nonpartisan Congressional Budget Office similarly cautioned that this move would cause unemployment and hurt the economy.

The system has offered many unemployed households the equivalent of $25/hour in benefits for staying home. It was always obviously illogical, based on the work disincentive it creates. However, in the year and a half since, there has been an enormous, concentrated, politically motivated effort to deny that the excessively generous welfare benefits are playing any role at all in joblessness.

For context, we currently have 1.2 unemployed people for every unfilled job opening. Small businesses are also reporting massive shortages of willing workers, even as they raise wages.

So, Morning Consult surveyed unemployed Americans and asked them why they turned down job offers. About 13 percent openly admitted their reason for not returning to work was “I receive enough money from unemployment insurance without having to work.” If this representative sample is extrapolated across the entire unemployed population, that equates to 1.8 million Americans who admitted to declining to go back to work because they could earn more on welfare.

Meanwhile, another 12.1 percent said that they were not offered enough money to return to work. This subjective determination is likely also influenced by the generous benefits as a fall-back option.

Here is a graph from Axios showing the full results: 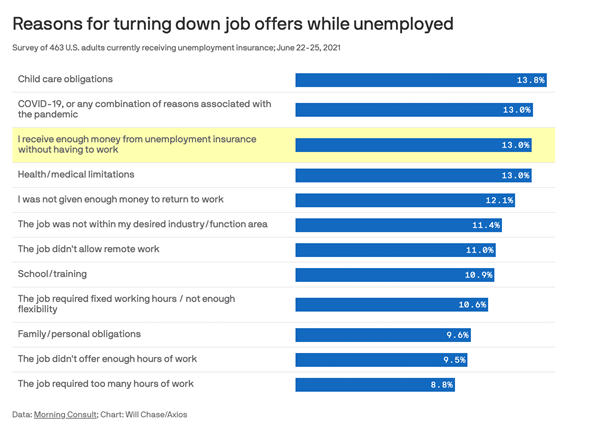 Here we have solid confirmation that millions of people have remained unemployed because of the federal government’s reckless expansion of the welfare state. This is, on its face, even more vindication for the many conservative-leaning states that canceled the benefits early. And it offers even more compelling weight to the argument that the federal welfare expansion ought to be allowed to lapse in September as scheduled. (There will undoubtedly be a push to extend it; the “temporary” program has already been extended several times.)

But the Morning Consult poll results are also, most likely, a wild underestimate.

Just think about it: Would you admit, if a pollster called you up, that you’re lazily staying on benefits because it pays more than working? Probably not. There’s a very real phenomenon in polling results where people, quite naturally, skew toward offering answers that are more flattering to them than the unadulterated truth. We can’t know the full extent, but I think it’s safe to assume that the real figure is much higher than 1.8 million.

Of course, we never should have needed poll results to tell us that disincentivizing work would lead to fewer people working. That’s what basic economics taught us all along.

Brad Polumbo (@Brad_Polumbo) is a libertarian-conservative journalist and Policy Correspondent at the Foundation for Economic Education.

This article was originally published on FEE.org. Read the original article.