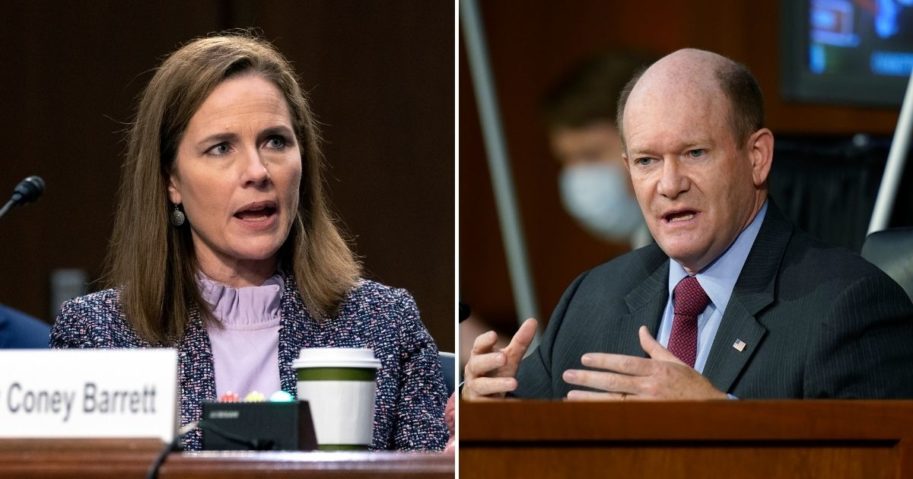 Day three of the Senate Judiciary Committee’s confirmation hearing for Supreme Court nominee Judge Amy Coney Barrett could well have been labeled Independence Day, as the nominee sought to remind Democratic senators that she will decide the law based on her judgment and no one else’s.

During the hearing, Democratic Sen. Christopher Coons of Delaware sought to determine how much of a carbon copy Barrett would be of the late Justice Antonin Scalia, and asked whether she would agree with Scalia’s dissent in a 1996 case that ended the male-only admissions policy at Virginia Military Institute.

“Well Senator Coons, to be clear, as I said, I think in response to this question yesterday, I do share Justice Scalia’s approach to text, originalism and textualism, but in the litany of cases that you’ve just identified, the particular votes that he cast are [a] different question of whether I would agree with the way that he applied those principles in particular cases,” Barrett replied.

“And I’ve already said, and I hope that you aren’t suggesting that I don’t have my own mind or that I couldn’t think independently or that I would just decide like, ‘Let me see what Justice Scalia has said about this in the past.’

Amy Coney Barrett shuts down Sen. Chris Coons and Democrats’ attempts to define her as someone else entirely. #SCOTUShearings pic.twitter.com/1hoAe8b2m0

“Because I assure you, I have my own mind,” she said.

“But everything that he said is not necessarily what I would agree with or what I would do if I were Justice Barrett.

“That was Justice Scalia. So I share his philosophy, but I’ve never said that I would always reach the same outcome as he did,” she said.

Does Judge Amy Coney Barrett belong on the Supreme Court?

The Scalia connection was also probed by Democratic Sen. Dianne Feinstein of California, who noted that after President Donald Trump announced he was nominating Barrett, the judge said her judicial philosophy aligned with that of Scalia.

Feisntein said that during oral arguments in a 2013 case, Scalia “stated that he believed Congress re-enacted the [Voting Rights Act] due to a ‘phenomenon that’s called perpetuation of racial entitlement.’

“What is your reading of this and your understanding of the history of the Voting Rights Act?” Feinstein asked.

Barrett then reminded Feinstein that she is her own person.

“When I said Justice Scalia’s philosophy is mine too, what I meant is that his jurisprudential approach to text as we’ve talked about originalism and textualism is the same that I would take. And I think as for the Voting Rights Act, I think that it was obviously a triumph in the civil rights movement,” Barrett added.

During the hearing, Barrett showed she was not afraid to push back when Democrats attempted to push her into a corner.

Democratic Sen. Kamala Harris of California asked Barrett several questions, such as whether COVID-19 is infectious and smoking causes cancer, before asking: “And do you believe that climate change is happening and it’s threatening the air we breathe and the water we drink?”

Barrett walked around the trap.

Barrett says “yes” when Kamala Harris asks if she accepts COVID is infectious & smoking causes cancer but doesn’t say if climate change is a threat, calling it a “contentious matter of public debate”

Harris: “You’ve made your point clear that you believe it’s a debatable point” pic.twitter.com/lYpBcDHjc3

“Senator, again, I was wondering where you were going with that,” Barrett replied.

“You have asked me a series of questions that are completely uncontroversial, like whether COVID-19 is infectious, whether smoking causes cancer, and then trying to analogize that to eliciting an opinion from me that is on a very contentious matter of public debate.

“And I will not do that. I will not express a view on a matter of public policy, especially one that is politically controversial because that’s inconsistent with the judicial role, as I have explained,” she said.

Traditional America Values CAN be Reinstated and Preserved – But Only...