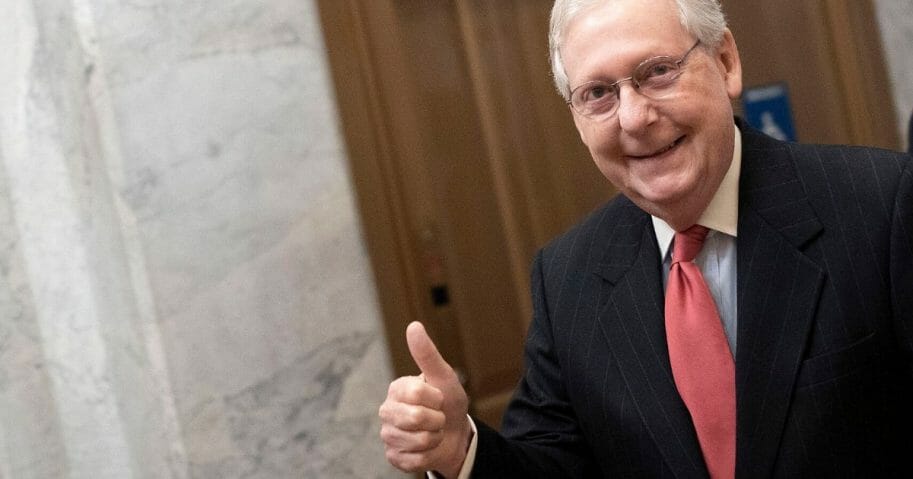 According to Fox News, which received an early look at the legislation shortly after the final draft was completed, the current plan is entirely penalty-free and assures that “interest shall not accrue” until the end of the six-month period.

Loan payment would recommence in October.

The inclusion of such language directly expands upon previous action announced by the Trump administration Friday to provide “at least” 60 days of interest-free student loan payment postponements to all federal borrowers.

Executive postponement was officially put in place Wednesday by the Department of Education, however, while the administration awaits congressional passage of the newly agreed-upon relief package.

“These are difficult times for many Americans,” Secretary of Education Betsy DeVos said in a statement. “We don’t want to do anything that will make it harder for them to make ends meet or create additional stress.”

“Americans counting on their tax refund or Social Security check to make ends meet during this national emergency should receive those funds, and our actions today will make sure they do,” she added.

DEVELOPING: @senatemajldr Mitch McConnell announces the implications of the agreed-upon #coronavirus stimulus package: “The Senate has reached a bipartisan agreement… it will rush new resources onto the front lines of our nation’s healthcare fight.” pic.twitter.com/ErmxVjBv2F

After days of negotiations and return trips to the drawing board, White House representatives and a bipartisan group of Senate leaders departed Senate Majority Leader Mitch McConnell’s office just before 1 a.m. Wednesday morning with a finalized emergency relief deal in hand, according to CNN.

The agreement came after a frenzied weekend on the Hill, with tensions running high Sunday and Monday over Democrats’ blocking a previously forwarded economic relief bill drafted by the Republican majority alone.

Publicly available details on the new bill, which would constitute the largest emergency aid package ever passed by Congress, are in short supply — but those who have seen it report the inclusion of hundreds of billions of dollars in small business and distressed company loans, unemployment insurance benefits and even long-rumored direct payments to American individuals and families.

“At last, we have a deal,” McConnell officially announced on the Senate floor. “After days of intense discussions, the Senate has reached a bipartisan agreement on a historic relief package for this pandemic.”

“Today the Senate will act to help the people of this country weather this storm,” McConnell said.

“When our nation comes through this and takes flight again on the other side, it will be because American heroes won this fight. All the Senate can do is to give them the resources to do it and that’s exactly what we’re going to do today.”

Do you support suspending student loan payments for the time being in light of the coronavirus pandemic?

The newly agreed-upon relief deal is expected to be passed in the Senate by the end of the day Wednesday, barring last minute hiccups.

Less involved with this round of legislation-crafting than with the first coronavirus relief package, Speaker of the House Nancy Pelosi has expressed optimism regarding the deal, but is reserving final judgment, NBC News reported.

The speaker has been tight-lipped as to if and when the House will take up or pass that package for presidential signature.

Publix stores to have barriers for cashiers as virus spreads

Forget Big Government. Here’s How to Help Our Neighbor in the COVID-19 Era.